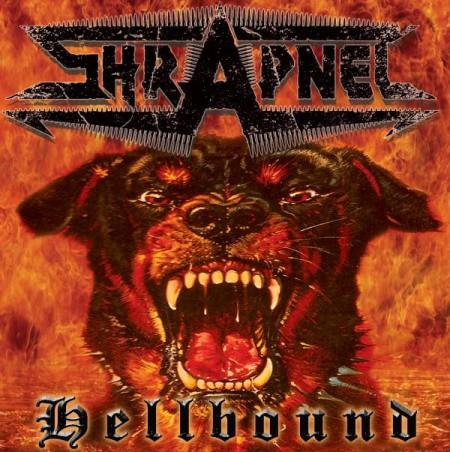 A vinyl which is separated into two parts is nothing special, but it is nice to see that in the case of Shrapnel the A side is “side black” and the B side is called “side thrash”. By contrast, it is slightly disappointing to read the names of the two musicians: Andrew Doepel and Louis Rando. I thought their real names are “Sado Slaughterer of Hell” and “Herald of Domestic Violence” or something like that. Maybe the half-heartedness of their naming was the reason why the duo only released this single album. And so, I do not just review an album here, but the complete legacy of Shrapnel.

Well, the names of the A and B side already give the broad outlines of what can be expected, but the thrashing elements prevail, at least in terms of music. Needless to discuss that titles like “Trample the Altar” or “Hang on the Cross” would be to the credit of every average black metal combo. Nevertheless, the screaming guitars, the riff-driven structures and the neglecting of atmospheric sections result in a thrash metal dominance. The nagging of the lead vocalist also rather remains of the serial killer next door than of a demonic creature that stumbles through lightless, snow-covered forests. The drummer thrashes his kit in a competent manner and his velocity motivates the guitars to present hundreds of rapid riffs, leads and solos. “Cynic Horde”, for example, holds a pretty insane solo that combines Hanneman/King-elements of “Reign in Blood” with a minimum of melody.

Shrapnel avoids obvious mistakes. Their songs are full of energy, each and every riff starts from a mighty basis and frippery such as acoustic breaks, sensitive sections or technical ballyhoo does not occur. Too bad that this alone does not create an outstanding work. The eight tracks do not have this certain element that separates classics from decent songs. There is no chorus that keeps sticking in the ear immediately and no riff that overruns the listener with its individuality, even though the dense and furious “Six Pack Attack” is one step ahead of its internal competitors. The constant nastiness of the material indicates the authenticity of the two ruffians, but tension-building details fall by the wayside. Doepel and Rando are really focused on brutality and the collateral damage of their resolute mentality is that their musical flexibility remains below the limits of human perception. Of course, one makes acquaintance with a couple of tempo changes and the comparatively long closer follows another, slightly more casual approach than its seven predecessors. Nevertheless, it seems as if the band had an allergy against the sound studio and so they had to come to the end as soon as possible with the effect that they did not find the time to think about some noticeable variations.

In a nutshell, Hellbound is an acceptable album with an adequate artwork, but it does not command me to cry about the early death of Shrapnel. Unfortunately, here the whole is less than the sum of its parts. Taken for itself, each and every song convinces due to its energetic design, but the output in total appears as a partially unfulfilled promise. And lo and behold, this also goes for the entire project called Shrapnel.