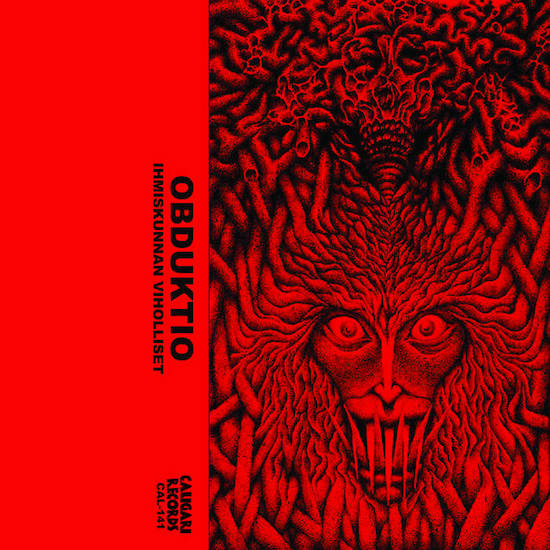 Noisy, erratic, afflicting, abrasive, grinding-punk death metal terror from Finland. The short and violently assertive demo from Perinei was not enough from Caligari Records, no they had to pour salt on the wounds this time by means of Obduktio’s debut album Ihmiskunan Viholliset. A toilet of infected remains spew over on this outing further infecting the puss-oozing wound with a bacteria unlike any contagion lingering in the underground. These adversarial movements aimed at the species so ignorant in its ways, come with a groove and a headache- inducing-racketing suitable covering themes of pollution civilization have encouraged and indulged.

From the disgust of ‘Introitus III: The Barbarian Tribe of Visigoths Ra’ to the constipated-awakening sounds of 'Aamu', you get a plateful of nuances to disturb the ones you hate most. As offensive and condemning as a ‘how dare you’ from the jaws of Greta Thunberg, Ihmiskunan Viholliset brings a 28-minute splash of messy grinding death metal for you to roll around in. Want some thrashing war metal in your contaminated grind? Let ‘Ajan Pilkkominnen Palasiksi Ja Palasten Nimittamin’ take care of your pesky urge. One of the ugliest punky-grindcore albums I’ve heard in a long time despite my distaste for the genre. I think the songs offer enough variation to sustain its 28-minute runtime, after-all its grindcore which is not the most appealing of genre types and only few bands could pull-off making a decent one. The subgenre by itself is already crammed with shit, but shit with meaning minus the dorkiness of the genre is always a plus. Some humor is good, but many bands overdo-it so it’s no wonder serious metal-heads shun the form.

Tunes here are packed with utter disdain and loath granted in all lengths, from 1 minute to 4-minute tongue lashings, no corner is safe, all malignant, all through. ‘Elämäsi Katoaa’ and ‘Korkein Taivass, Syvimmat Haudat’ are probably the highlights here, but that's just me, there's enough sour milk to pass around here, so it won’t be a surprise if your faves differ, to each his own.