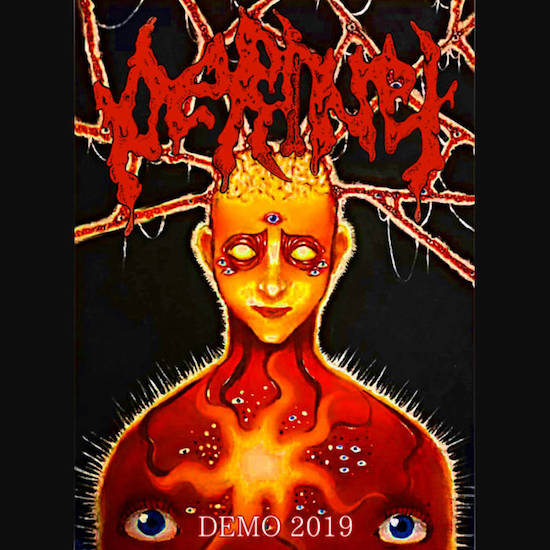 By now it has come as no surprise that anything the rest of the world can do in metal, Finland do better. When was the last time I enjoyed a deathgrind record with punk influences this much?, I can't even remember, or I'd probably have to go as far back as the mid-90s and pick an album. Thanks to Perinei with their debut demo out on Caligari Records I don't have to go digging up relics.

Clocking in at around 11 minutes and some remains, the demo from this young Finnish band has me wishing for a full length as early as possible. You've got 4 songs here proving how magical, mixing death metal with grindcore could be if you know what you're doing, and with a pinch of punk this Finnish soup of societal and gory excrement serves as a fine appetizer for the main course hopefully soon from the band. 'Kutsu Syvemmalle' which I found a rough translation for being ‘Invitation to Deeper’ is not necessarily an invitation, rather a kidnapping that'll drag you back to 1993-94.

This is falling in love all over again, but with a girl half Swedish, half Finnish dressed in leather, spikes and has pink hair; the rest of the tunes is a building of rapport with her, you get acquainted with her likes and dislikes, moods and habits. A punky mid-tempo undertone and some black metal entails ‘Harmaan Auringon Alla’ (’Under the Grey Sun?), punk metal again this time with more speed takes place on ‘Anenkefalia’ and speed/thrash/death/grind/doom make out before you on ‘Avuttomuus Kohtalon Edessa’ (’Helpless in the Ede of Destiny’?) I wouldn't change a thing besides the production for the next release, beefy around the curves, much like Døden Læger Alle Sår. Got no problem with the vocals, the riffs are sinister, and the drumming is on the money; must have full-length.