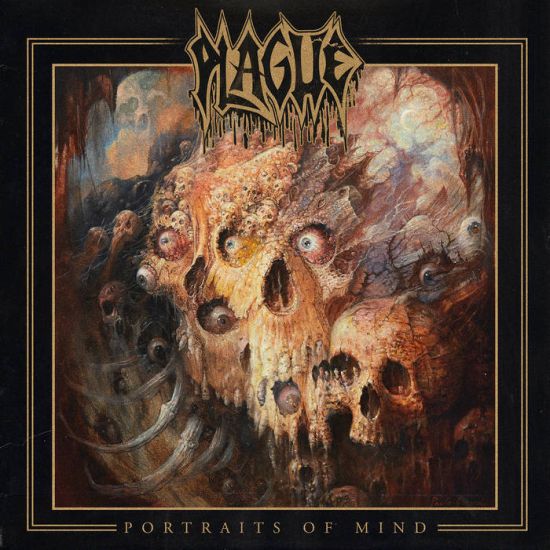 You've heard it before and you've heard it often in the last 5 or so years. We're in the middle of a death metal revival period and we've also reached peak of it. Indeed, death metal has had a massive revival in the last couple of years, and while for the most part there have been some truly outstanding bands that have brought back the soundscapes of the past or push the subgenre beyond the norm, there's also been way too many bands in such a short amount of time and it has made the whole revival angle very redundant, and most would say it has overstayed its welcome. That being said, in comes Plague from Greece, which proudly says through their music state that we ain't heard nothing yet.

This band, courtesy of the folks at Redefining Darkness who signed them, waste no time and from the get go you're assaulted with an onslaught of quality death metal. The album opens with "Intersperse", which was also the lead single and after the sound of bells and a solid minute of doom like riffing, then comes the breakneck speed and anger that all good death metal had. The album as a whole keeps this initial momentum, the unswerving speed the band manages to display is impressive and backed up by excellent performances from each member, however, make no mistake, this isn't just caveman riffs on speed, the band flexes their musical chops throughout. The stand outs are the string section, the guitars and bass are the strongest performances displaying both memorable hooks and riffs, as well as complicated and intense solos that would make the likes of Trey Azagthoth, Dave Suzuki and Chuck Schuldiner nod in approval. For a death metal album, the compositions are very dynamic and in songs like "Deranged Madness" the band tones down the speed, switching to a mid-pace in order to focus on creating an atmosphere of dread and it doesn't feel like an abrupt change, its seamless. The same applies for the second half of the album. The band are a masterclass at controlling the flow of their songs and the overall pacing of the music is perfectly balanced between chaotic speed and brooding sludge.

As a whole, Plague's chosen style of death metal for their debut is a hybrid of classic raw death metal akin to the heyday of the genre in the late 80's with the technicality of death-doom and some black metal like influences, particularly in the guitar work. It's a melting pot of all these different styles and they make it work with the aforementioned strong performances and excellent musicianship. However, that can also be a bit of an entry barrier. This album isn't just indicative of death metal as a subgenre, it revels in it, the band through this album show their undying and candid passion for the genre and they aren't ashamed of it. But that's I say is a disclaimer rather than a flaw. This is a terrific debut and a good omen of what the next decade of death metal can offer.