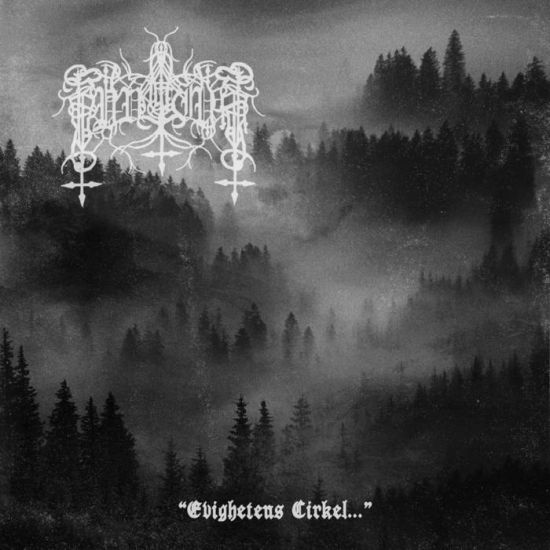 The fossils of the early to mid-90s seem to have been undergoing restorative treatment for some time now. Its bones gathered, brushed and gently polished to present in the vast museum of black metal. Now fit for exhibition in the shimmering glow of the moon at dusk, a sanctuary, a temple re-erected on the cold terrain of Swedish forests. Architecturally marvelous is this new title Evighetens Cirkel… under Muvitium, the brainchild engineered by none other than Swartadauþuz. There is truly no justifiable way to describe the talents of this being, any music crafted by his hands glimmers of a golden aura. Evighetens Cirkel… shares the same sentiment of dedication as any of his other projects' releases. He must be under some sort of oath or is bounded by an obligatory fulfillment to black metal given the amount of gold standard music he has been assembling for some time now. To come this far and garner such respect in a genre many have been failing at repeatedly is in itself a sigil of excellence. Only recently he contributed significantly and satisfactorily to Greve's "Nordarikets Strid" (a masterclass record), now to continue his rampage in this ancient glare of 2nd wave black metal is a listener's dream fulfilled. With lips pressing delicately at the age of mysticism within the genre, Evighetens Cirkel... embraces and romanticizes an aura of eldritch oak, freezing the hands of time with 6 odes to the nighttime waltzes.

Compositions are frigid and beautiful all the same, thus the atmosphere presides over all songs like a mother wolf would to her pups. Still an omnipresent climate of dread follows in watchful pursuit with 'Evig Vandring Till Gamla Riken' instigating the austere descent. Emboldened by the synthetic and vocal aesthetic of Swartadauþuz, every sing ring with repetition in the consciousness. Just as hostile as an Azelisassath can be, Muvitium puts on display nakedly the milieu chambered on Evighetens Cirkel… Like razors to the skin the sharp snarl of Swartadauþuz engraves contrast to the sorrowful waves of choirs directed, matching level with the alluring ambiance of the keyboards. 'De Viskande Vindarna' and 'Vid Mörkrets Fäste' string together with tonal flexibility moments of triumph and somber soundscapes of awe. Later to the 10 minute 'I Nattsvart Dunkel', you receive a gift of Muvitium's most varied and enchanting soundscapes. Somewhat depressive, noticeably more ambient and already aggrandized through its length and further intensified through its drum fluctuations peaking towards the track's end.

Originally released digitally through Mysticism Records and now handed over to Purity Trough Fire for a physical representation, Evighetens Cirkel... can now reach a wider range of the audiences who hold dearly the tangible offerings of the genre and more specifically Swartadauþuz. This kind of music has had its share of renditions but as many become tired of the modern world destroying the glorified fragments of past time pleasures, a rebirth of the age is greatly welcomed. Thus, herald around bands such as Ringarë, Greve and Paysage d'Hiver refusing to see the flame flicker and extinguished.