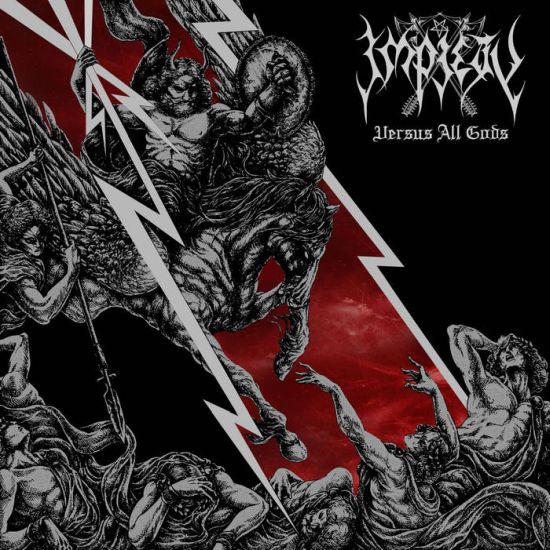 I've had a soft spot for Impiety ever since I first heard their album Kaos Kommand 696 back in 2002. Back then, it was the most savage thing I encountered since Immortal's classic "Battles in the North". Being the noise addict that I am, I've been following their movements from then on. These past few years my interest in the band and their output had waned somewhat though. Not that they had a drop in quality but main man Shyaithan started writing longer songs and those failed to completely capture my interest. The reason for this is that I have the attention span of the average goldfish, that's why. Now it's been seven years between their last full length and this one and from the sound of it, this hiatus has been useful. Not only have the songs become shorter but the band puts on a display of powerful ferocity that I found missing on their last few releases. They are back with a bang, so sit down, shut the fuck up and pay attention!

The band plow through their own brand of black/death metal with revitalized energy, bringing back memories of their aforementioned Kaos Kommand 696 and its successor Paramount Evil. After it's Bathory-ish intro, the band storms out of the gates to showcase their fierce might with 'Reigning Armageddon'. Brutal and precise, Impiety slaps you around with their energetic performance and the barbaric execution of their music. Monotony is avoided by the incorporation of blistering lead guitars and some well-placed hooks into the music. The chorus to the song 'Azazel' will have you pumping your fist and shouting along. When I heard that the band was going to incorporate female vocals in one of their songs, I've got to admit I was somewhat skeptical at first, but the end result is pretty awesome! Henriette Bordvik's contribution to 'Interstellar Deathfuck' gives the track a bit of a Mercyful Fate/King Diamond vibe without feeling out of place in the band's seething aural assault. As always is their hammering attack accompanied by an excellent production that is both clear and hard as nails. All this is presented in a gorgeous digipak as well, making the total package a mandatory purchase for everyone who is seriously into brutal and aggressive metal.

They have returned, the masters of true black/death metal savagery. Ride on in blasphemous glory forever!