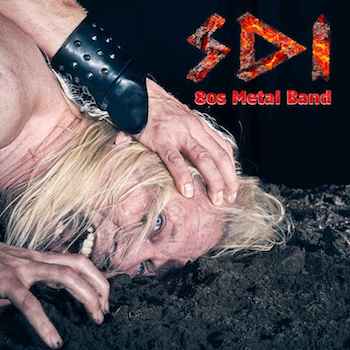 The return of SDI – isn’t it wonderful? No, alarming! They did not release a new album during the tiny period of the last 31 years. Honestly speaking, I did not miss them. Their clownish debut fulfilled my life ration of SDI sounds. But just when I thought that they are dead they jump, fresh as a daisy, out of their coffin and deliver an album with the cool title 80s Metal Band. Nice name, indeed, but the general question remains: was it really necessary to record – and publish! – twelve new songs? Well, I doubt that this output will catapult the trio into previously unknown regions of popularity. I wish I could say something positive, but the guys are quite lousy songwriters and many lyrics still deal with imbecile topics. Listen to “Porno” and maybe you know what I mean. The lyrics do not fit the verse metre, the chorus seems to be the crippled son of Accept’s “Russian Roulette” and stupid bass lines as well as the unbelievably bad bridge with its ultra-pale melody line do the rest. The song lacks metallic harshness and everything else which makes fun – thank God, there are also better (read: not completely botched) pieces to find. Already the next track “Action” has a speed metal compatible structure and avoids monumental defects. This does not mean that a new classic is born, but it also does not make the audience reflect about suicide as the better solution.

In simple terms: the vocals suck. I regret it, but I cannot say it differently. They do not go hand in hand with the music. In addition, there are so many sections where the voice lacks even the smallest form of aggression. Given this fact, sometimes it seems as if the vocals actually belong to another album. Whenever a piece seems to find the right track, either the ordinary, mostly powerless performance of the lead singer or a shitty Helloween-for-beginners melody tramples the good ideas into the dust immediately. I know, Helloween melodies are always an inspiration to self-mutilation (with the exception of those of “Ride the Sky”), but now SDI – applause – deliver the ultimate nursery rhymes. Fortunately, they do not do it all the time, but still too often. And so, a lot of tracks pass by while spreading a pretty nonsensical aura or none at all. Exceptions? Not really. A good detail like the basic riff of the title track is foiled by the ohoho-vocals at the beginning. Another example - the truly catchy and stirring chorus of “Freeride” has to accept that the inadequate mid-part kills a lot of song’s strength. Generally speaking, the back-from-coma-combo fails to integrate appropriate breaks. Sometimes their songs just start to develop a good flow, but the trio reliably destroys what it just has created in a matter of seconds.

The production is acceptable, even though I miss density and pressure to a certain extent. However, with regard to the songs, it does not make sense to lose many words about the technical realization. And so, I’ll put the focus again on faceless numbers like “Sneaky War”, the boring “She Said” with its Accept rip-off riff or the terrible football anthem “(Let the) Ball Run” which suffers from miserable gang shouts and frustratingly weak guitar lines. And isn’t it almost a burlesque spectacle that a band that hasn’t record an album for more than 30 years proclaims, “we are here, we are now”? Needless to say, that all these cuts shape a pretty heterogeneous work that fails to bring speed and traditional metal together. Due to a couple of mediocre or acceptable pieces and the chorus of “Freeride”, there is perhaps a small chance to get used to this full-length. However, read my lips: I don’t play the guinea pig. I respect and appreciate the metallic passion of the band members and I do not doubt their manual skills, but the best “SDI song” is still the eponymous closer of Violent Force’s only album.