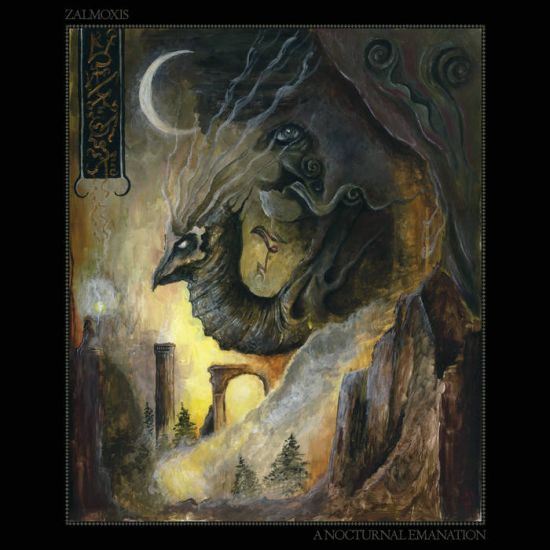 Not to be misled by the cover artwork, Zalmoxis’ EP, A Nocturnal Emanation, is not a tutorial or beginners guide on how to train your dragon; rather, it is an atmospheric raw black metal track of beauty, obscurity and malice interwoven. Also, I urge you not to be thrown-off by the ‘raw black metal’ tag applied, Zalmoxis is far from ((that)) band compositionally; in fact, the project is unorthodoxly distanced from anything of that sort. To look for an item remotely similar to A Nocturnal Emanation, one would have to take some traits from the cavernous death metal genre mix it with something heard from Revenant Marquis or a band/project within the Helvetic Underground Committee, then perhaps venture outside of metal and reel in Arkona (Russia). This long track is the strangest yet still repeatable record I’ve heard in a while. Avant-garde in some ways but still has enough to be characterized under the black metal tree. Having to dig for the music here comes as a pleasurable task; due to the array of ambient and harsh elements clashing against each other with frequenting occurrence, a sort of blurr/smoke is created that hides the music. But diving into those clouds of claustrophobia holds a sense of reward for the listener, that in the process of dispelling the smoky haze is greeted by compelling music of mysterious, melancholic and morose movements.

For a track of 24 minutes in duration, A Nocturnal Emanation achieves quite the feat by not just making the listener want to circumspect-fully examine the music but gives him/her pleasure in doing so. In addition, when in pursuit of the music, each new discovery pieces together in a way that is followable. Every new asset on A Nocturnal Emanation is brought into play such that a mental roadmap is created. Not to be mistaken for predictability, though offering a projection, the music is tactical at a level in terms of how and where diverse and contrasting segments are introduced, thus making it familiar to a degree but also unpredictable. It’s the little things that are done here that make the difference of standing-out. The music builds in crescendo-esque fashion, moving among sad, overpowering and mystic tones achieving overdrive, while still amending its tempo with an influx of different sounds. I’d hope more is to follow A Nocturnal Emanation, that bends perception while distancing itself from the norm.