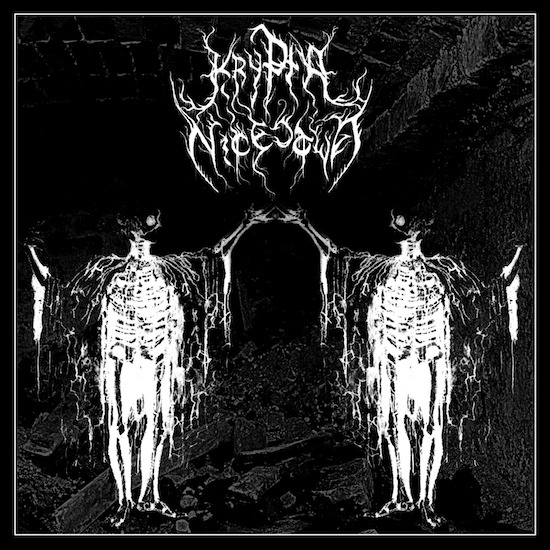 Following 2 demos and 2 splits, Krypta Nicestwa return with an EP titled "Sarkofagi Nocnych Zjaw". Very synth driven black metal echoes through the halls of forgotten souls on here; early 2nd wave almost, like the very first incisions of keyboard synth in the genre. Seemingly as though dungeon synth had a fling with black metal in some sense and formed this during its magic moment. Backed by 2 individuals, one S. and the other V. (Vorghast), Krypta Nicestwa is bull's-eye on the tone and atmosphere of "Sarkofagi Nocnych Zjaw"; makes me want to carve out a wooden sword and go parading through the forest. Every aspect about the music appears sincere in rendition to embryonic 2nd wave symphonic black metal, sometimes reminiscent of Troll's "Drep De Kristne", other times of Negură Bunget's early work.

Never mind the laughter preceding the music on 'Spojrzenia Świątyni Nocy', this album is no joke, with salutary position assumed and face postured with wicked grin, "Sarkofagi Nocnych Zjaw" is within the territory of relics old (90s) black metal. Comes from Poland with synth as cold as the land, this time around the music here is well mapped out into 4 spells of epic sorcery, 'Czernie Bytów Chtonicznych' and 'W Sferze Pozagrobowego Trwania' give you that ancient chessboard feeling where every move is of an esoteric pondering, while 'Ołtarze Diabelskich Pierwocin' brings the arcane beauty of pleasures condemned. As it stands I could say "Sarkofagi Nocnych Zjaw" is a 9/10 but I'll reserve that rank for a full-length album given one is on the way and follows the footsteps of this. I can't think of a bad comment regarding this record, it emanates a feeling of being made in the 90s but left behind and forgotten for some reason, such as an ancient temple lost to memory; such should be the way of 90s black metal this sort.