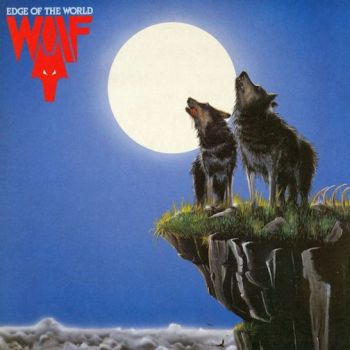 Not to be confused with Sweden's Wolf, a band that has been resurrecting this traditional style heavy metal that was heard throughout the early 80's from the U.K., Britain's Wolf is quite a bit more restrained in their performance and production on their one and only Edge of the World. An album to feature some really seductive album art, a memorable logo and a simple single-syllable moniker. It would seem some thought and direction had gone into the release thus far, I love the marketing that went behind it, if I were a collector, I would search high and low for a vinyl release even though I don't have a record player, nor am I actually crazy about the actual music. Thankfully, I'm not a collector as the vinyl print is circulating for around $40-$50 right now, and that's far too much to pay for music that doesn't quite go the whole nine yards to my ears. Wolf weren't quite as onboard with the whole scene going on right before them as say, Angel Witch, but in all honesty would sit next to your copy of said band's 1980 debut without a problem in the world due to the bizarre production and overall 60's pop appeal going on in the underpinnings of Edge of the World.

With a blend of dance and AOR, the moments such as "Heaven will Rock n' Roll" or "Red Lights" where wolf sound like they could've been nothing more than a Tank clone are the exceptions as opposed to the rule. That's fine in my book, it gives the album its own character, a character which doesn't exactly suit its album cover as well as Tank's Filth Hounds of Hades did, but I'm reminded about how this was the same era that brought us Witchfynde. The production here is really odd, as if it were recorded at two different studios, with the first couple of tracks coming across really muted. If you could imagine how a dense fog clouds your vision, that's what the production is for the majority of the album. Then "Heaven will Rock n' Roll" is way livelier and fuller of color, the contrast makes it explode out of album by comparison where everything else has a more relaxed feel to it. It might sound like I don't like the album's production, actually I think either way would've been fine, but would've preferred the whole album have a consistency to it. I personally think the muted, cloudy production actually works pretty well for what is ultimately a pop band. It's the same vibe that bands like Golden Earring and Blue Oyster Cult managed to perfect, two bands I'm sure Wolf were no doubt inspired by.

That becomes abundantly clear from the first track, leading off with the title-track, it's the kind of lighter pop rock that Diamond Head would try to break into on their sophomore release, "Borrowed Time". Granted, I think Wolf do it better, as Diamond Head have taken the brunt for selling-out by their second album. Wolf didn't even try to pretend like they were interested in anything but selling out from the get-go, at times they come across pretty well, other times they're doing the bare minimum to get by on tracks like "A Soul for the Devil" which reminds me of Diamond Head's apathetic epic "In the Heat of the Night", "Head Contact (Rock n' Rol)" fares no better, and it's here that I'm positive that their drummer just started learning to play. While their two guitarists usually offer very little outside of the most cliché licks that every beginning shredder should know. You know, the kind of mid-tempo licks that made Kirk Hammett's entire career.

Edge of the World is a sandwich that puts its best material on the opposite ends of the album with everything in between being boredom-inducing filler. The best the album has to offer still isn't all that strong, when it comes time for the guitarists to add some embellishments to fill in the spaces between the singer, it's usually noodling that doesn't evoke anything, even still, that's more than you'll get from whichever drummer happens to be on either track. The keyboards help to fortify Wolf's soundscape, making tracks like "Medicine Man" and the title track some of the best cuts off the album. "Highway Rider" happens to be my personal favorite from the album though, I think the masked production actually benefits the song in this case. It creates a similar atmosphere that I feel whenever I listen to very early atmospheric black metal from the 1990's, obviously without sounding anything like black metal. Sometimes the guitar even kind of fades into the background and becomes less audible as if someone was messing around with the volume knobs mid-performance.

Wolf are a different breed from your average artist from the NWOBHM scene, but not necessarily a band that anyone is missing out on from not having listened to them before. I'd say this album falls somewhere between the ever-ambitious Angel Witch and the coma-inducing pop drivel of "Borrowed Time". Sometimes those minimalist moments work out to create some interesting atmosphere, as is the case with "Shock Treatment", usually though I'm begging and pleading with the band to give me more of what they're already offering, an album that has a very cool sound to it, with a ton of potential to be more than what it was. Regardless, I'd still rock that album cover on a full-print t-shirt or a poster.