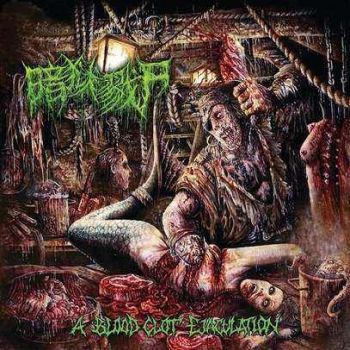 Wow, after trying out this band for the first time, I can definitely say I'm very impressed. I've been checking out a ton of new slam/brutal death metal bands lately, and this one really hit the spot upon first listen. I was expecting this to sound different and not much anything like this at all.

There's been several slam albums that I've listened to and deemed it 10/10 perfection, and this album adds another one to the list! Right off the bat, we gotta talk about the production, it's PERFECT. FLAWLESS. There are many great slams scattered across this album and they all sound absolutely beautiful without any mess-ups. I don't how to further explain it, but the production is just so clean and is what makes this album great in the first place. Some of the best production I've ever heard.

The drums sound pretty real for being programmed. Most slam has a clanky snare, but the snare here has a thick, deep sound. This album is filled to the rim with bass and a chunky feel. The guitars are soooo good, the sound of the guitars is great, and the riffage is magnificent. Just like the bass, this album is filled to the rim with slams too. This is a slamming death album, but not every single song is purely slam, there's some pure death metal implements too. This album sounds heavily influenced by Cannabis Corpse, specifically their album "Beneath Grow Lights Thou Shalt Rise". The guitars and drums sound almost exactly the same. The band overall, and A Blood Clot Ejaculation sounds hugely influenced by Cannabis Corpse and Abominable Putridity. The Deicide cover of 'When Satan Rules His World' is awesome. It showed that the band can throw some variety in there. When I was listening to this album I was enjoying it very much, but when the Deicide cover came on, it was totally unexpected and made me love this album even more. Definitely one of the biggest highlights of the album, amazing Deicide cover.

Another thing that I noticed from this album is that it's got huge Embryectomy vibes. I was gonna talk about how this band sounds like them until I checked that this was released a year prior to Embryectomy's album. So instead I'll say that Embryectomy probably took some influence from this album then, because this album and "Gluttonous Mastication of Embryonic Remnants" sound very much alike.

Every song on this album offers its own thing. Clean production and catchy, pleasurable riffs and songwriting makes for a great whole album, and for every song to be loved and enjoyed apiece.

So yeah, I don't think I'm missing anything else, this album has everything that a fan would love; tons of slams, awesome guitar sound, cool drums, good songs, and again, a Deicide cover?? Wow, I don't understand what couldn't be enjoyable here. I don't see any issues here at all. Great job boys, this here's a flawless slamming death record. 10/10 as it truly deserves.