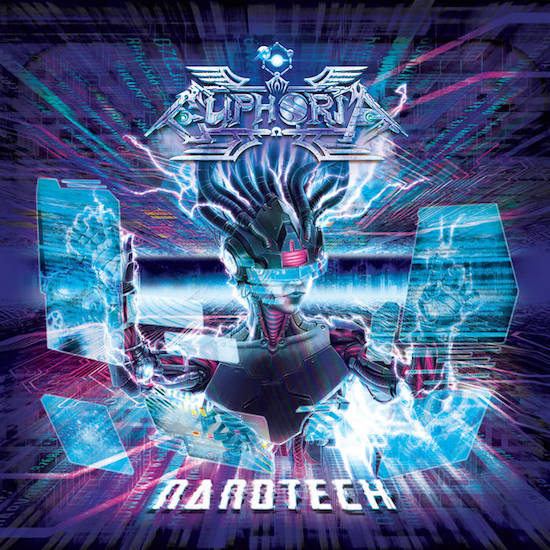 A nanometer is a billionth of a meter. Luckily, Nanotech, the second album of Euphoria Ω is more than just a billionth of a thrash metal album. (By the way, how would such an “album” sound? Would it be a friction of a second, filled with a distorted guitar beep?) Nevertheless, the six songs with a playtime of half an hour are free from exuberant structures as well. Anyway, the album is neither “nano” nor overly “tech”nical. Euphoria Ω leave no doubt that comprehensible song patterns have a higher relevance than the demonstration of manual dexterity.

Some comments on YouTube see a connection between Euphoria Ω and Vektor and this might be correct, but I want to propose another point of reference. The material reminds me slightly off In Malice’s Wake. Just like the Australians, the here presented dudes from the US of A celebrate a traditional yet vibrant form of dynamic thrash which blows another fresh breeze into the scene. Their approach is surely not highly original or even unique. But in times when 80% of all promo mails refer to a new black metal “sensation”, it feels good to have the opportunity to listen to a proper portion of thrash. The guitars deliver good riffs without exception, the level of vehemence makes me speak of a pretty harsh form of thrash and the vocalist does his job in a solid manner, even though his voice does not possess outstanding traits. It’s this tried and tested quite raw performance which fits the genre well. And maybe it speaks for him that the only somewhat weak song, the comparatively mild “Neon Dreams”, features long instrumental parts which fail to result in a convincing tune.

A few robotic / electronic intros are the explanation why some people talk about “cyberthrash” when it comes to this album. I am pretty bored by these academic categorizations. The album does not rely on these gimmicks, but on stainless steel and hot iron. A mid-paced neck breaker like “Respawn” with its fat guitars does not need “cyber” elements in order to have the effect of a cometary impact. Of course, the voluminous and clearly defined production is helpful in this context, but it is not only the mix that makes the album pretty great. The songs mirror the enthusiasm of the five dudes, their joy of playing and their knowledge of the crucial factors in order to create an efficient thrash work. “Labyrinth Online”, for example, scores, among other things, with an extremely well-constructed ending where the guitars generate a very dense sound experience.

Admittedly, I am not familiar with the previous material of Euphoria Ω. Thus, I cannot speak about evolution or stagnation, improvement or deterioration. So, let’s evaluate the album in its own right. It would be an exaggeration to say I am listening to a “must-have”, but it is also definitely no mistake to give it a chance. It is free from annoying influences, it does not lack substance and it spreads the pristine thrash feeling. Finally, it has definitely more to offer than the nanometer thrash album I was talking about in the first paragraph. Did I already say that I work meticulously on this innovative output? I am sure it needs all my musical and compositional competence to fill the playtime of less than a second.