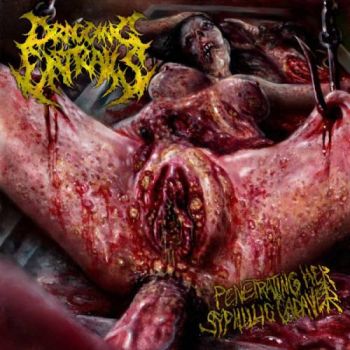 This is no question an essential slam album. Along with a few other slam records, this is one of the best slam releases of all time. Another side project of the Kraanium twins, Dragging Entrails showcases pure slamming brutality with no holdbacks, limits, or fucks given.

The drums are programmed, yet they sound so real, it's insane. As with many other slam albums the drums sound real until you look up, and the drum programming on this album is flawless, this is some top-notch drum programming that instantly fools people that listen to this for the first time. As well as good programming, they dont fail to add in some cool drum patterns in there too. On some tracks it's your regular double kick and snare, on others there's little creative fills and these "stop-go"-type beats, etc etc. The drums are obviously the greatest aspect of the record as they're heavy, brutal, consistent, and entertaining.

The guttural vocals are best as can be, there's two vocalists here and it's nearly impossible to distinguish between the two guys, but that doesnt matter. Whether it's Martin or Jaymes, the vocals overall are extremely solid and greatly disgusting. The guitar work provided by only Mats is solid and slammy indeed. Good riffs, slow, crushing riffage, your usual slam guitar vibes. All songs are great and worth the time for sure.

Yet again we got another flawless slam album with nothing to complain about or wish more of. These three boys put out one of the best slam albums of all time and this doesn't disappoint, they brought their work hard and good.