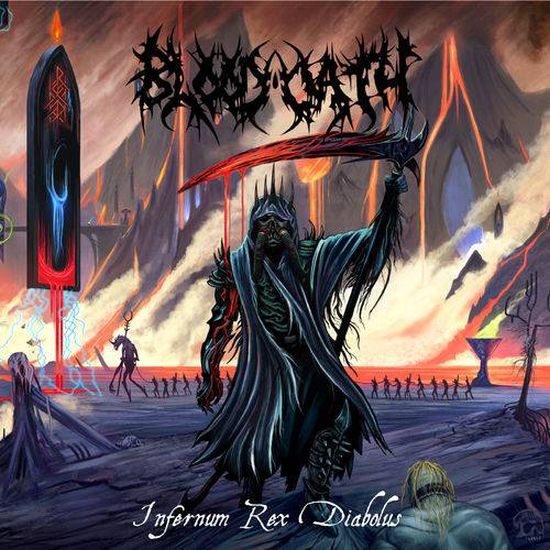 In the overcrowded dance hall that is death metal, there comes, on rare occasion, a band that manages to nestle into the crevices of the genre and produce something well worth hearing. Often the band(s) manage to take an already-written pattern and augment it ever slightly so as to carve themselves a notch in the medium. Sadly, these bands are few and far between for my aged ears, but. . . every now and then. . . .

Blood Oath comes by way of the ol' Union Jack and slices into the din with a pretty substantial slab of old school death metal that mixes some thrash elements with its own brand of tempestuous metal music. This sophomore effort titled Infernum Rex Diabolus cuts the rhetorical fat off the bone and just offers up a simple, yet effective palate that is both well-produced and effectively brutal without overloading the magazine. From certain sonic areas, I can hear some similarities to my hometown's Cardiac Arrest, which is about as high a compliment as I can muster. Death metal is a pretty confined space, especially with the current resurgence of OSDM making its return to form known at every turn (some worse than others), but these guys don't seem to follow the current trend of drowning in otherwise nostalgic mediocrity for its own sake.

As a hard-boiled guy of aged introspection (AKA borrowed elitism in spades), I usually find myself over-analyzing some releases to their proverbial death, which is my blessing and curse these days. That said, the same chasm of musical familiarity Blood Oath treads is one of rather engaging, hook-laden goodness. When the term “riffs-for-days” usually pops up in random posts on social media, I tend to mentally gravitate towards music found in the CD's tracks “Lycanthropic Bloodlust” or “Angels to Some, Demons to Others”; the songs here just trample evenly along well-worn ground and manage to forge new footprints in the cold, loose earth. The guitar work herein is also pretty rooted in the ancestry of the accepted masters, painting rather colorful pictures of violent galloping with perfectly-crafted slowdowns in just the right areas. I really enjoy the overall swaying between the two mighty oaks of thrash and death, a distance all too often marred by dis-ingenuousness or outright inability; these guys manage to not only rise to the occasion but dance carefully along the slight lines between two already-polarized genres.

For all their worth, Blood Oath cuts through the causal mire and designates its due place among the legions in both small and large bursts of intensity and the aforementioned “riffs-for-days”. I also applaud the band's attention to lyrics that are both stimulating and well-thought-out, a seemingly starved area these days. I understand the adage of less-being-more, but that doesn't mean stultifying the audience to the point of pallid stupors. Go all in, or go the hell home! These guys did just that, and then some.

Check these guys out where and when you can – they deliver the goods very nicely.