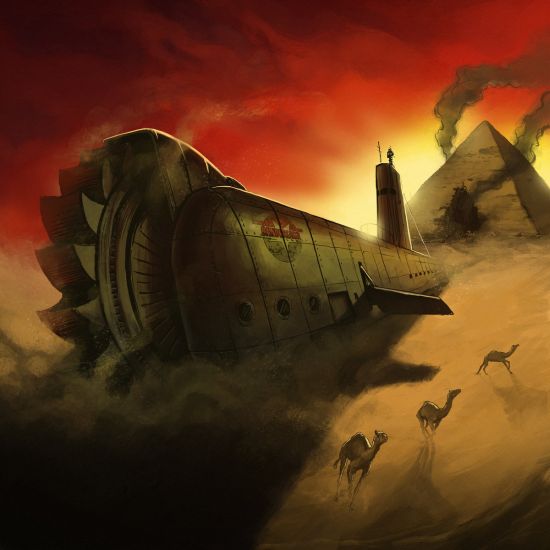 Makes me think Temple of Void, Disma and Loathfinder merged with Megalith Levitation. I'm not big on stoner doom, but the last mention is the most recent in the sub-genre I've heard that hits like this. Sandbreaker's debut album Sandbreaker does a damn fine job of mixing death metal with stoner doom metal; holy heck I thought this would be a disaster but the decision to invest in a plowing machine the size of a dreadnought responded with favorable returns. After all the desert is humongous in sand-scape, so as an initiative to get the job done in a timely fashion, the conductors in Sandbreaker pooled their resources and bought the biggest one they could find.

All silliness aside, the potential here to turn this band into an underground powerhouse is exceedingly high. Can’t stop playing this one, the CD has been sitting in the disc-tray of the computer for so long, you'd think I was troubleshooting hardware or there's a problem with the drivers. The only complaint is, I wish the EP was not so damn short. Surely a song or two could have been added, nonetheless, no harm done. All songs move with a slow bouldering weight, the vocals are just excellent, near-perfect growl pitch, the guitars sound mean as fuck and the drumming is precisely on-time and punishing all the while, any heavier and I'd have to add Encoffination to the list of mentions; especially on a song like 'Eternal Heat' where the movement ranges from mid-paced to blasted toilingly dense, making you feel as though the desert heat is draining your life force. 'Season of the Plow' has a sly little guitar solo that emboldens and levitates the music, would have liked to hear more. Just an all-round Goliath of sounds, squeezing you to a diminished grain.

The record is evenly mixed, and that monotone fuzz often attributed to stoner doom metal is non-existent on Sandbreaker; whoever handled the production did an exemplary job. I didn't find myself sleeping half-way through the music, so kudos! to that individual.

The cover artwork emits a sensation of being overwhelmed all the while adventurous; plus, there's a nod at Death's "Leprosy" on the back cover. Sandbreaker is already very immersive, but if you want to turn it up a notch, listen to it when watching agricultural videos of farmers out in the field fertilizing the land or reaping crops with their tractors and other machinery. Now that plowing's out the way, move on to the next step in cultivation, get that forest grown! there are mouths to feed. A high recommendation for farmers.