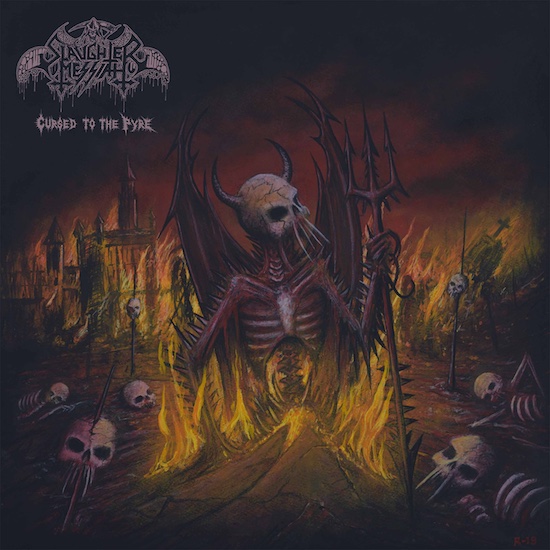 It seems to be a widespread opinion among the protagonists of extreme metal that the level of musical harshness simultaneously defines the degree of diabolic bestiality. I beg to differ. Bands like the gigantic Necrophobic have proven evidence that it is possible to create pure devilish sounds without playing the insane music-violator who performs songs with totally vulgar titles. Especially a great number of "war black metal" hordes will probably never understand that rabid chaos and misshapen noise are no signs of Satan, but of their half-baked musical skills. Nevertheless, it is not easy to give the audience the feeling of being confronted with the unadulterated bestial core of extreme metal. "Cursed To The Pyre" belongs to the few outputs that allow us an insight into the pitch-black soul of our music. 2020 starts amazingly (and Necrophobic have also announced a new album…).

Of course, the prototypical promo sheet babbles about a more mature style, a big step forward and yada, yada, yada but what can be taken seriously? Indeed, the tracks impress with mature and excellent structures. On the one hand, they celebrate sinister catchiness. Already the opener 'From The Tomb Into The Void' scores with a very memorable chorus. On the other hand, the song patterns avoid the traditional conventions successfully. This homogeneous album does not lack variety, even though the creative wiggle-room of this archaic form of metal is pretty limited. But I see definitely no evolution – and I am absolutely happy about this fact. My simple thought is: why change the best? Already the last two EPs mirrored the outstanding (and ripe) song-writing competence of these harbingers of the Apocalypse. I love to experience this kind of stagnation. Is there anything better than ingenious musicians confirming their abilities, their mentality and their status? Okay, maybe sex with Debbie Harry when she was 35 years old, but I fear no one of us has this opportunity to compare.

The eight songs exceed the 42 minutes mark, but don't worry. They don't lack compactness and come to the point in a matter of seconds. This goes for straight torpedoes like 'The Hammer of Ghouls' as well as for multi-layered pieces such as 'Hideous Affliction'. Slaughter Messiah can be compared with the aforementioned Necrophobic, but they do not just combine black and death metal. A thrashing element haunts through their music as well and regardless of the exact stylistic mix, they unleash five percent more fury than the Swedish role models. Perhaps one can say that Slaughter Messiah connect the black aesthetics of Ketzer's "Satan's Boundaries Unchained" with the monstrous vehemence of Desaster's "Angelwhore". Needless to say, that their sound also reminds me very pleasantly of the brilliant Enthroned debut. Anyway, let's stop the namedropping, because the king of venomous nagging (Lord Sabathan, who else?) and his henchmen stand on their own feet. They do not use blast beats (if we neglect some extremely fast parts in 'Pouring Chaos'), but more or less every other tried and tested ingredient of blackened, thrashing death metal. Profound, effective riffs meet murderously howling solo guitars, well embedded high-pitched screams express pain and (a surprisingly big number of) melodies that Satan himself could not have done better are accompanied by precise drumming and supported by a few atmospheric, almost spiritual sounds every now and then. By the way, all these building blocks benefit from a mighty and infernal production. This pretty transparent yet homicidal mix is simply perfect for this kind of music.

Minor misdemeanours? Well, the first tones of the album, which starts without any superfluous intro, lie in close proximity to the beginning of "Swamp of Torment", but this just increases the brand recognition. Secondly, any form of innovation does not show up, but who gives a f**k about innovation? Thirdly, if we want to be picky, we can mention the exchangeable artwork. Further flaws? None. Instead, the band ploughs violently through the encrusted ground of misanthropic metal with fierce resolution. Slaughter Messiah present their ironclad full-length with utter grimness, bitter contempt and musical excellence. My only serious criticism is that it took four very long years until this feast of authentic hatred was finished. But the devastating result speaks for itself: the material reaches the ultimate level of diabolic bestiality and almost musical perfection. I am really surprised, because my expectations were very high after gems like 'Crypts of the Undead' – and so I feared that they would have no chance to satisfy my hopes. But Lord Sabathan, Lucifer or whoever managed it cleverly: this album does not disappoint me in any way. Quite the opposite. And now excuse me. I have to make sure that I am not too late for a copy of the gold vinyl of "Cursed To The Pyre". I have to meet the diabolic core of reckless metal again and again.