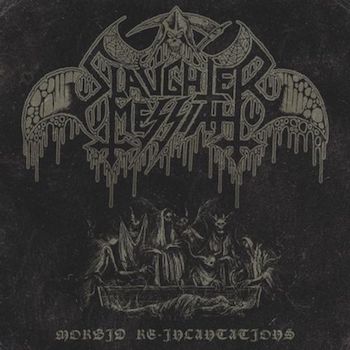 Enthroned are still a great band, but they were a real force at the beginning of their career. Their debut "Prophecies of Pagan Fire" was a very powerful and promising statement, even though it delivered trace elements of naivety. The further albums also reached a good or even brilliant level. Lord Sabathan played a prominent role on these works and here he returns (not for the first time) with Slaughter Messiah. Or, to be more concrete, the spirit of early Enthroned reappears. Jagged riffs flirt with black leads, pure vehemence is combined with malignant nagging and high-pitched screams send ice-cold shivers down the spine. This is the red-hot sound of the underground that will never die, because it has this pristine passion, this fascinating negativity, the brutal yet artistic component that blows away the daily shit.

Atmospheric parts are of minor relevance, but the formidable "Bells of Damnation" touches the less swift yet still violent side of black metal. Surprise, surprise, bells ring and an excessive mid-tempo section reveals its destructive power. The entire production reminds the listener of the aforementioned Belgian black metal pioneers, but this is no act of imitation. Sabathan just sticks to his guns and three of four compositions show his unbroken mentality. The fourth track presents a Bathory cover, but it rather sounds like an old Bulldozer demo. In other words, this version is the final proof that the pretty crazy Italian trio was heavily influenced by Quorthon (R.I.P.) - but I guess, this is nothing new. "Die in Fire" does not belong to my most favourite tracks of Bathory, but even if this were the case, I would prefer an EP with four brand new tracks. This applies especially to bands like Slaughter Messiah that do not lack creativity and energy. Hell yes, Slaughter Messiah have forged two perfect tracks that possess everything a song needs to fulfil all requirements in terms of misanthropic black metal.

Both "Blasphemous Exhumation" and "Crypt of the Undead" rush over the land like a storm of steel while revealing exciting details in abundance. Usually, I am not a big fan of solos, but the 18-seconds-solo of the opener which sets in at 3:12 sounds absolutely immaculate. The imperious vocals of Lord Sabathan must be mentioned, too. He reaches his best form whenever the chorus of the first track forces its way: "Blasphemouuuuus Exhumatiooooon". The maximum pressure of "Crypt of the Undead" and its raw staccato riff at the beginning deliver further intriguing elements. No doubt, this horde knows how to celebrate a bloody feast in the slaughterhouse and so the dudes wear their band name justifiably. The dense and adequate production plays its part as well in order to make Morbid Re-Incantations to what it is: a demonstration of strength, might and violence. The re-incantation of the glorious songs of early Enthroned has been successful.