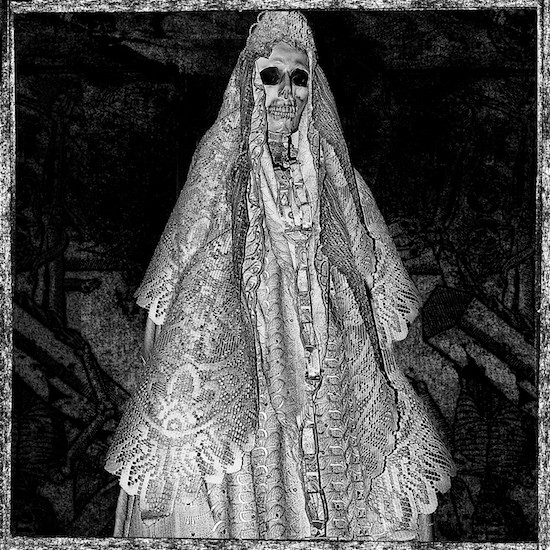 Gaze in wonder, fright and awe as the necromancer practices his charm of ethereal mysticism under the incense lit full moon with startling precision and wisdom. The caller of crepuscular things jots down 6 cursed canticles of his dark undertaking on Vrees De Toorn Van De Wezens Verscholen Achter Majestueuze Vleugels. Appearing to be another one of those solo raw black metal projects, however vast and oversaturated the sub-genre may be Dodenbezweerder stands clear of the mediocre and instead strikes with a necromantic diligence and funereal beatitude. In totality, the record is an experience that once committed to excites, entrances, entertains and arouses many deep sentiments.

In retrospect I recall some few releases branched under raw black metal having quite a bassy or thick production that if thought about is opposite to the shrieking and sharp sound primitive black metal has been primarily associated with. However, with the bass now becoming a more prominent characteristic of the sub-genre one could say an evolution of sorts is indeed active. Also, the cavernous type of yell and growl has become perceivable more utilized in raw black metal and black metal this sort. Gasping voices heard in gothic metal and a form of obscure murmuring has also been added to the cosmetic palette of raw black metal. All of the mentioned attributes find themselves on Vrees De Toorn Van De Wezens Verscholen Achter Majestueuze Vleugels in-turn giving the music a multi-faceted feel that reciprocating-ly adds to the interest of the final product. Though it is not to be mistaken for a replacing of key or cornerstone elements, certain staple/traditional qualities of the medium are kept in place to ensure validity and sincerity, as the shrieking vocals, some degree of abrasive reverb, primitive drumming and atmosphere are held-fast to. On the thought of atmosphere, ambient currents run without restraint through Vrees De Toorn Van De Wezens Verscholen Achter Majestueuze Vleugels; largely undeniable and with conspicuous exhibition they appear ever glamorously attired in frightening, depressed, mystical and conquering garments ever adding to the profound nature of 'Als het vuur van mijn toorn is ontstoken zal het branden tot in het diepste dodenrijk','Glimmende zwaarden door de mist van het evangelie' and the harshly-unwelcoming 'Zalf de voeten van het hoofdeloze lichaam'.

With so much occurring on the record already, malefic keyboard synth and organ tones (at select times) are added as a glazing coat to the music on the record. At times loud in the mix such as on the title track and other instances as an atomic, yet still an identifiable feature on 'Glimmende zwaarden door de mist van het evangelie'. Yet a meditative state is still somehow instigated and kept active despite the many colliding factors on 'Vrees de toorn van de wezens verscholen achter majestueuze vleugels' that for a debut undertaking nails the climate of the music thus matching what the artwork evinces. You might even add that the cover art advertises with accuracy what's to be expected, a thing that can't be often said about other albums within the same genre. On Vrees De Toorn Van De Wezens Verscholen Achter Majestueuze Vleugels however, all aspects appear connected therefore resulting in a completionist charm.

Something this sort has that gatefold vinyl quality, and I would not be surprised to see it released as such but I don't think that will be the case, as to my knowledge it's only set to be offered digitally, on CD and as a single sleeve 12". A wax addict could only wish the former is the case because Vrees De Toorn Van De Wezens Verscholen Achter Majestueuze Vleugels is an honest and dignified attempt at resurrecting and respectably modifying the essence of raw black metal.