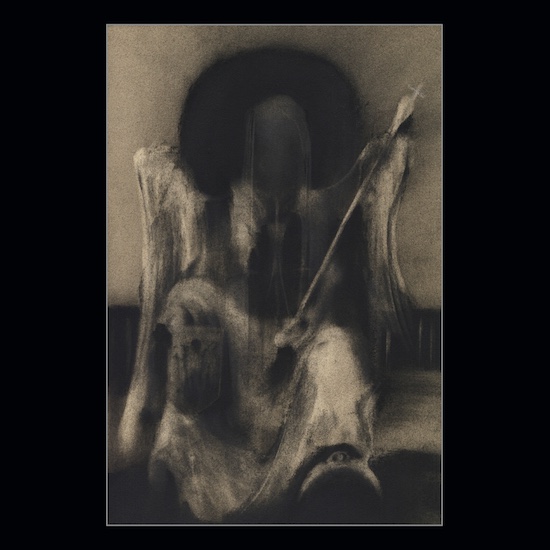 Seemingly derivative of Portal, Hissing and Antediluvian, what settles on the wax is a suffocating, chaotic milieu brought into play by an ill-tempered rotation and recurring array of indistinct frequencies. Perhaps the most ideal term one could use to describe the sonic hacking orchestrated by whomever play in Amnutseba is unsettling. This perplexed procedure titled Emanatism is terrifying, rude, yet organized enough to carry itself respectfully. Thus said, Emanatism is not intended for the newbie, truth is, I don't think this was designed for anyone but for the band's own pleasure; however, if you decide to dive in, be warned. Launched at you is a tumeless, mayhemic upheaval of indecipherable, otherworldly sonic projectiles. This one has that "was not designed for entertainment purposes'' thing going for it, but due to its exceptional quality, you can't help but punish yourself with the aim of attaining the gratification that awaits. If you're no stranger to Portal and bands that type, then Emanatism should not appear problematic as far as song structure goes; however, in addressing the feel of the record, it comes off as being creepy if not downright sinister.

Things start off on high gear with 'Abstinence', a cold and uncompromising track unveiling the ways of the band early-on. Semi-technical drumming and riffing are pinned down under the jaws of muscular and threatening vocal roars, snarls and gibberish-esque cries symptomatic of an extremely aggressive, inhuman behavioral outburst; heck I won't argue as far as the inhuman aspect is concerned, given the member/s involved with Amnutseba have/has yet to be revealed, so don't be surprised if it turns out the beings behind Emanatism are from a different star system. The ruckus of banging blast beats and plague-like riffing communicate the message of chaos without breaking a fingernail, but the true highlights are the more rhythmic sections of the music. In recollection of 'Ungrund' and 'Dislumen' both of which carry a heated atmosphere and reddening temperament, to add a contrasting cool, some of the smoothest transitions are made to groovy passages that sort of take you away from the hellish clatter of the distortion.

If you thought those two tracks are crazy, just wait till you meet the verdict in my opinion of Emanatism, 'Tabula' fucking what on earth did my ears sit through? I couldn’t make out a single word uttered (if they qualify as such). Good luck trying to figure out what exactly is happening on that side of the planet, because it surely isn't normal. Breaking the rules of synchronization while still somehow managing to keep the music at a stabilized level, 'Tabula' is all out nuts. Architecturally, the drum work and riffing are built to support each other in which they do as heard toward the middle section as they line up in tempo and rhythm perfectly. But what of the vocal advancements made? Ranging from bitter moans and groans, to enraged outbursts, this one element alone sends the music tumbling down a rabbit hole of insanity with a choir and all to accompany the descent. A darker portal if you may, leading to inflamed and prohibited territories, unrecognizable to the clairvoyant. Bending both perception and understanding to conform with corrupt ideologies and systems, Emanatism is a noose knotted tightly around the neck of resolution and peace of mind.