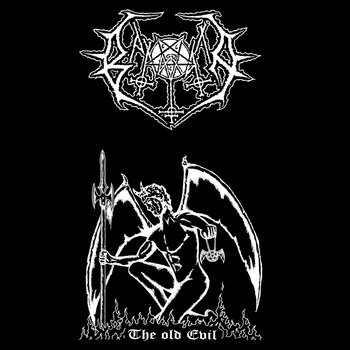 First of all, I must say that I like the first review for The Old Evil, written by NausikaDalazBlindaz, very much. Almost everything she writes is true. I just do not see the thrash / speed influences she has mentioned. Probably I am simply too deaf or too blind. From my point of view, Baxaxaxa perform black metal in its purest form. Their music can be compared with the noisy anthems of Moonblood. Both bands are in search of the apocalyptic essence of black metal – and they are successful in doing so. One can discuss whether or not keyboards dilute the pureness of the genre, but Baxaxaxa do not shy away from an occasional use of synths. They do it with all respect to the genre and so this detail does not hurt the hellish overall impression,

The Old Evil – this name matches the material perfectly. The German obscurantists go back in time and offer archaic sounds that the young Tom G. Warrior would have loved. The guitar lines are simple or, to express it clearly, primitive, the vocals embody pain, despair, misanthropy and any further black metal compatible emotion. The more or less monotonous melodies are accompanied by atmospheric elements (weird synths, a bell) and driven forward by cleverly integrated tempo changes that take the listener on a wild ride through the waste land of horror from time to time. The faster parts are those that let me forget the questionable sound. Do not expect a state-of-the-art production. Baxaxaxa celebrate the refusal of the mainstream listening habits. Fenriz and Nocturno Culto smile. Isn’t this the kind of we-piss-on-your-grave-sound they invented back in 1992 / 1993? However, the mix makes a little difference between Baxaxaxa and Moonblood. The Old Evil sounds more direct than the rather fog-covered music of “From Hell – The Gift of Hatred”.

All four regular songs after the intro convince with their immoral and nihilistic attitude as well as with the fact that the band makes a lot out of a little. Each galloping, morbid or vehement guitar line hits the mark and so I just regret two things. Firstly, I miss a lyric sheet, but it has probably fallen victim to the minimalistic concept of the group. The sparse visual design reflects the lack of vanity of true black metal cleverly. Secondly, it’s sad that the infernal unit did not record a complete album. But there is still time to release a full-length. I’m sure it will be interesting to read a review of NausikaDalazBlindaz about it. Until I can enjoy this literary pleasure, The Old Evil is haunting me – and maybe even beyond.