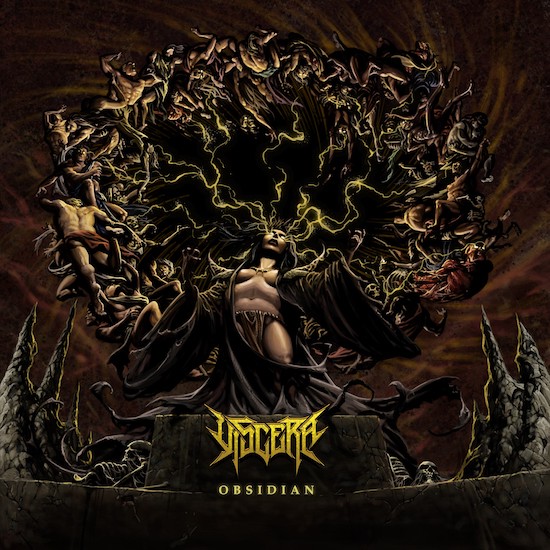 When I saw an announcement that Viscera, a new band from UK, was about to release their first album under a Unique Leader banner, I thought "Oh, a new band! Might give it a go". Saw "Lamb to the Slaughter" video and my jaw dropped. Then I found out that the band might be new, but the musicians are definitely no tech/deathcore/slam spring chickens.

The line-up consists of Jamie Graham on vocals, who's already been in Sylosis, Heart of a Coward, A Blood Red Summer and Raise the Dead (although only backing vocals/guitars in the last one), which already shows that it won't be an amateur recording. The rest of the band is Alex Micklewright on drums (also in Perversion, ex-Abhorrent Decimation, ex-Martyr Defiled), Ross "Lenny" McLennan on guitars (used to play guitar in Abhorrent Decimation, Apparitions of the End, Echovirus, From Eden to Exile, Reign of Fury and Terrathorn), David Archer on bass (also ex-Abhorrent Decimation) and Adam Bell, who used to play guitar in Immerse. So, all of the musicians have the skills, been playing tech death/deathcore/slam for quite a few years now and this album shows how good this mixture of skills is.

My first impression? Yes, while I'm waiting for new Abhorrent Decimation album, Viscera's Obsidian indulged my hunger for this kind of music. And knowing that Ross was playing those solos that I liked so much on "The Pardoner" album, it actually might be my new Abhorrent Decimation. But it's not enough to compare Viscera to AC as it has so many new flavors to it, mostly thanks to Jamie's vocals, fantastic drumming from Alex, working brilliant with David's distorted, gurgling bass and Adam's fantastic guitar skills, too. It's like a supergroup, but it seems like it's going to be the main band for each musician from now on. Some solos like in the title track are very close to skills presented by guys from Allegaeon, so believe me, you will be trying to pick up your jaw from the floor, which is not an easy task to do with your mind blown. Maybe I should add that Michael Leo Valeri is responsible for mix/mastering, so for example those brilliant sounds you hear in the opening melody line of "Delilah" or "Lamb to the Slaughter", resembling Brand of Sacrifice last album, have been put together by this guy.

Regarding the material - it's a bit over 35 minutes long, 9-track album with a good mixture of everything I like. It's got heavy guitars, it's got some keyboards in background, good growls, pig-squeaks and melodic vocals, and what I'm addicted to the most - solos. It's very spacious, heavy, but also very catchy. It just gets into your brain and stay there for long time. Obviously "Lamb..." is the first track that started haunting me, but actually each of them has some kind of melody that sticks and doesn't want to go. My favorite is probably "Immersed in Ire", but I think that the title track is either very close second or will take over the top position after few more listens.

If you want some well-produced, perfectly executed mixture of tech/slam/deathcore get it now. Well, as soon as it is out. "IREEEEEEEEEEE!" THUMP!!! (my favourite breakdown :-)