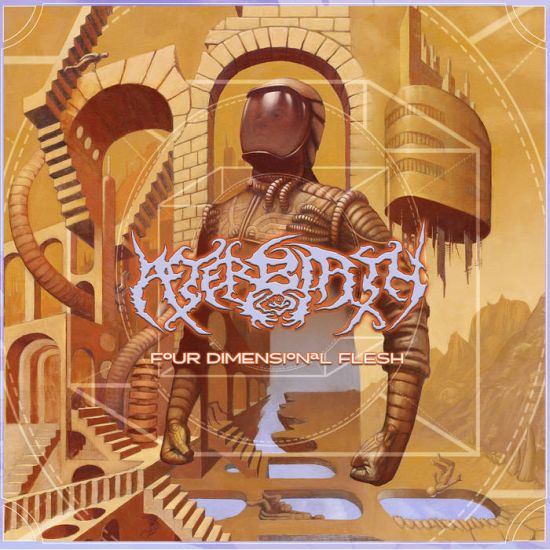 When you listen to the word brutal death metal, you picture bands like Devourment that move into the scene that depicts dimensions full of guts and gore, putrefaction, and degeneration. Putrefying vocals of almost unbearable noise that has been copied for thousands of bands all around the world. Most of the bands in the brutal death metal/slamming scene do not propose shit; they just replicate what the previous bands did and so on. However, I think Afterbirth with their latest record by the name of Four Dimensional Flesh is aiming to change some stereotypes in the brutal death metal scene.

Ok folks, as soon as the album starts your head is smashed by brutality mixed with complex rhythmic-groovy sections. These guys brew the brutal death metal with technique in their instruments, they are fast and relentless but there also moments to slow down and do the typical break downs that defined this sub-genre. It’s not a matter of showing off how fast they're; it’s a matter of delivering clear-cut execution, no fillers only killer tracks. All tracks are examples of the guttural performance but also shows tremendous control and vehemence to execute labyrinthine pieces of music. The concept shows layers of depth and does not just scratch the surface of the average brutal death metal band, both lyrically and musically. In my opinion, Four Dimensional Flesh is a more sophisticated and evolved version of your run of the mill brutal caveman band. For instance, take your time to read the lyrics and you will realize that they focus on science fiction, abstract and ethereal topics. Title tracks like 'Black Hole Kaleidoscope' and 'Rooms To Nowhere' are just some examples of the lyrical themes the band uses to escape from the gory images that seem to pollute the music environment.

I could evidence that Afterbirth spiced up their brutal death metal with some groovy tech-death moments. However, hold your horses, don't expect any Braindrill or Archspire moments here. Afterbirth does not want to say “hey, look at my 5-string bass or 8-string guitar”, these guys are brutal for real and express their musicianship through overwhelming instrumentation. I think they are more similar to the likes of Cephalic Carnage, Blood Incantation, and Suffocation. The production is crystal clear and allows you to hear every single bass line, cymbal hit, riff, or guitar distortion. Vocals are very guttural and gurgling during some moments. The singer offers a variety of vocal textures that are very ad-hoc for the intricate nature of the record. The tracks change gears between technical execution and contemplative landscapes of inner self paranoia. For example, there are some instrumental songs like 'Girl in Landscape' and 'Dreaming Astral Body' that serve as a primordial cement that links the album together and builds into a kind of mysterious mind-bending and oneiric time-traveling experience.

All things considered, 35 minutes is a very economical listen but believe me when I say that Afterbirth does not waste any note, every passage is made with an intention and I mean it. These guys are brutal for real and they can write memorable songs; and mixing the brutality with complexity ends up in an interesting experiment that worked out for me. The album offers different dimensions of ferocious sonic landscapes that refresh the scene and the subgenre, breaking stereotypes and archetypes previously established. I have to say that I enjoy bands like Devourment, Cannibal Corpse, or Disgorge but from time to time is good to get out of the cave and get into a spaceship.