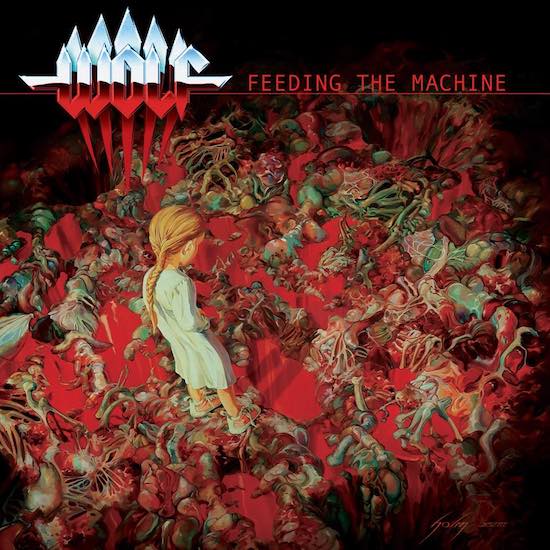 Hello everybody, the wolf howls again. This lovely animal has published another full-length and as much as I regret it, it’s an album that partly suffers from predictability. The opener is the afterburner of 'Shark Attack', the first track of the predecessor of Feeding the Machine. (As a side note, when does the stereotype finally dies that heavy metal formations start their albums with the fastest song?) 'Shoot to Kill' is, despite its trite lyrics about the uselessness of Christian religion, a good up-tempo beginning, but it repeats the formula of the aforementioned track in an almost painful manner. Additionally, it lacks this grain of insanity that made 'Shark Attack' taste very well. All in all, it’s a nice, but not a really thrilling entry in an album that profits from its well balanced, more or less flawless sound. It’s a state-of-the-art mix which does not score with individuality but with an appreciated affinity for the sound of old school metal. This does not mean that Feeding the Machine sounds like “Stained Class” or “Iron Maiden”, because the guys know very well how to use modern record technologies. Nevertheless, the conventional patterns, the generic riffing and the mostly successful search for a catchy chorus underline the band’s weakness for tradition.

By the way, there is one chorus which is no chorus but an accident. 'Spoon Bender' is the name of the shame and I want to know what the hell went wrong? This light and simple-minded anti-chorus destroys the power of the song’s solid riffs in a matter of seconds and the crude lyrics about the “cash flow in your system” do not make much sense as well. (Generally speaking, the poetry on this album is rather ridiculous. Lines about “hunter in high heels” and further nonsense do not score with authenticity and damage the integrity of the band.) Thanks to the leader of the pack, Niklas Stalvind, this downer remains an exception. He has penned almost each and every track and his potential are still admirable, although the album does not achieve the impact Devil Seed had. A grain of freshness is missing. One or two outstanding riffs or a chorus with real earworm qualities would have been helpful. Surprising moments are rare, we are listening to one of these more-of-the-same albums. Of course, the formation still holds high the banner of pure heavy metal and the guys do it without hiding their competence. The stomping and pretty vehement 'The Raven' is just one of a couple of quite strong pieces and its relatively bulky riffing stands in contrast to the smooth flow of songs like the title track.

I appreciate the fact that Wolf does not present a ballad – here they have cut the connection that lead to the pioneers of the genre who thought that five minutes of restraint per album are mandatory. Moreover, I must underline that the vast majority of the songs achieves a good level and I am willing to ignore that the selection of the bonus track, another cover version of an almost antique metal piece, reflects the predictable approach of the band for the final time. Given this situation, it’s up to you – if you want to celebrate a solid headbanging session with some cool, well-hung riffs like the one that opens 'Dead Man’s Hand', you can’t go wrong with Feeding the Machine. Its title fits exactly: the album keeps the metal machine running, no more, no less. Only if you want to experience outstanding, absolutely fascinating or even innovative tunes, you better ignore this work.