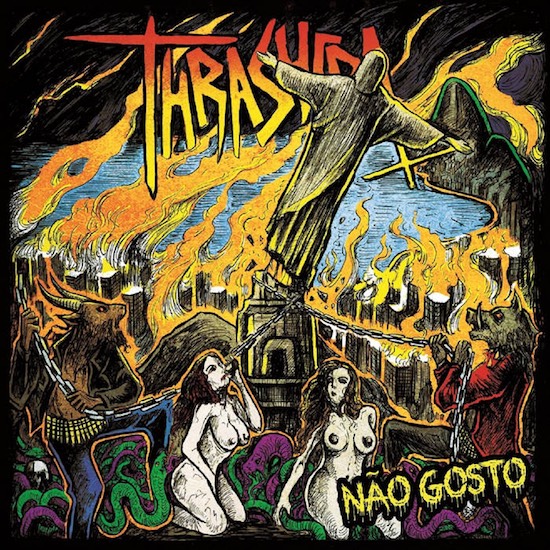 Coming from the land that adorns metal and thrash metal at that in which they sit unchallenged on the throne, Brazil has produced yet another jewel to behold. This time coming from a band under the name Thrashera with their 3rd full length album since being formed in 2010, Não Gosto! You'd think they'd be a lot more said about Thrashera given they've been around for nearly a decade, but unfortunately no, I guess you know what's to blame for that. Anyway, Não Gosto! is fun, violent, underground thrash metal. It moves fast, is catchy, and has a real 80s offensive feel about it. Not a lot of guitar solos but when used they tear ass, and the leads along with the choruses, I promise, you won’t get out of your head. Good old school thrash metal coming from a place notorious for quality thrashing bands and tunes. A high recommendation for any thrash metal fanatic.

I had to run back to their 2014 debut, For All Drunks 'n' Bitches after headbanging to every second on Não Gosto!, I found that the music did have its highlighting moments but just like their follow-up album Morte Webbanger that again showed competency in crafting catchy thrash metal tunes, was poorly mixed and mastered causing the material to appear thin and ineffective. However, this move to Helldprod Records helped massively to give the music the punch it deserves. Now we get a Thrashera that not only has written their best full length but has the backing of a professional production to give Não Gosto! the punch it deserves.

Translated to 'I Dont Like it!', Não Gosto! uncorks a bottle of over-pouring ill-will with 'Maré 669' that swings with drunken determination and fury, offering a taste of the menacing hooks to come down the order. Mostly adopting a similar pacing as opener 'Maré 669', songs down the order don't stray from the set formula but keep the guitars at work in the lead department with the watchful inclusion of effective solos on 'Rei dos Excessos' and 'Sangue ao Metal' for example, to heighten the album's compositional variety and aid the songs overall structure; not for the sake of, rather as companions and necessary extensions of the rhythms' framework.

With the A side living up to the hype of the cover through its destructive arms squashing all weak shit out there, the B side however takes the crown. Hitting and not giving you a chance to catch a breath with slick licks on 'Trapped in the 80s (Hard Version)', the speed-metal bordering 'Metal!' and my favorite track off Não Gosto!, 'Correntes não prendem serpentes', all of which do an amazing job of almost crushing the A side. The gruff vocals, sassy-riffing and stamina-building drumming, all seem lifted in terms of effect on the B side, the curtain call to an exceptional record.

Não Gosto! makes a bald-headed guy wish he had long hair, can't recommend this one enough; "Trapped in the 80s" for 35 minutes, Eu Gosto!