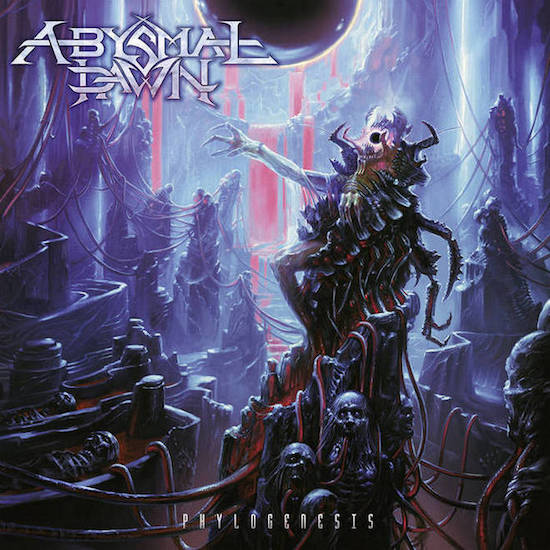 After six years of hibernation from the death metal scene, the American band Abysmal Dawn return with their latest codex called Phylogenesis. This being their most prolonged hiatus between each record, death metal enthusiasts all over the world were expectant for their new release. Let’s find out whether the album is an extension of their last effort Obsolescence and a declaration of principles of the “here we are motherfuckers” sort of or a new groundbreaking album for the subgenre.

Well, in regards of answering the big question: is Phylogenesis the continuation of Obsolescence? I would say the answer is tricky because the band preserves a trademark sound where the technical brutality is present all around their songwriting and overall structures in both pieces. Thus, is ok to say that indeed it is an extension of their sound but not like a sequel per se. I think the previous record was straighter forward in terms of musical aggressiveness and this new record focus more on having a chunkier and groovier production and that for me represents a step back in the final outcome. Songs like 'Perfecting Slavery' and 'Devouring the Essence of God' were perfect examples of relentless death metal violence in their previous effort Obsolescence and now the band is taking a direction where brutality is still there but is diluted with more groovy architecture similar to the songs like 'Inanimate'. Nothing wrong with that but in my opinion the new release falls short in execution. The first track from Phylogenesis, 'Mundane Existence', is just an example of my argument and a natural expansion of their previous one.

After the six-year interval that Abysmal Dawn had, many things have changed in the genre and old school as well as new bands have pushed boundaries to reach more brutal, technical and intricate sounds. I think that Phylogenesis has a very fresh approach to keep up with today's death metal standards. It sounds brutal and technical in songs like 'A Speck in the Fabric of Eternity' and groovier oriented in songs like 'Coerced Evolution'. I think the balance between technicality, brutality and melody is just right through the whole album. Obviously, there are some outstanding tracks that show some memorable hooks and shreds. For instance, I would say that 'Soul-sick Nation' has the most infectiously catching riff of the whole record, period. In general, the guitar department is notably covered by Mr. Charles Elliot; every riff and sherd are a delightful experience, no flaws whatsoever. So, to close this chapter, I would say, yes! This a declaration of principles from the band and a big “here we are again motherfuckers” statement.

Ok, right! But, is Phylogenesis a groundbreaking record? Has it re-invented the wheel? Well, I think this recording is solid from beginning to end but lacks that little something that defines a masterpiece. Abysmal Dawn has very competent musicians lead by Charles Elliot that as I said before is a master song writer as well as guitar player. The band has evolved in each album but in my personal opinion their previous effort was more appealing for its relentless aggressiveness and variety between songs, this new record sounds more lineal and structures from song to song sound very similar.

All in all, Abysmal Dawn has presented a very capable release full of brutal drumming and melodic, intricate and technical guitar passages. The long wait was worthy, I think that this album was a very pleasant and entertaining listen and represents a big step in the band's career and stablishes their name even more in the death metal scene worldwide. However, there is still a long way to walk for this band in the scene, many new records to come and room for improvement.