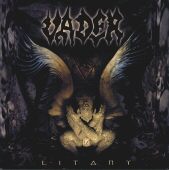 Type: Full-Length
Release Date: 2000
Label: Metal Blade Records
Genre: Death, Thrash
1 Wings
2 The One Made Of Dreams
3 Xeper
4 Litany
5 Cold Demons
6 The Calling
7 North
8 Forwards To Die!!!
9 A World Of Hurt
10 The World Made Of Flesh
11 The Final Massacre

I have a quick quiz - It’s 1986, a drummer speeds up all tracks so much that the band has to write extra material only to release a 29 minute recording. What album am I talking about?

For all of you true metal fans it’s as easy as asking you for your mother’s name. For you young headbangers for whom 1986 is last century, I’m taking about today’s classic - Slayer’s "Reign In Blood".

You might ask, what the hell does it have to do with Vader’s "Litany? Well, a lot. Twenty-six minutes (yes, you read it right – twenty-six) of the most brutal death metal you have ever heard (thirty+ with rework of "The Final Massacre"). And believe me you’re not gonna ask for more. It leaves the impression of a full hour of death and destruction. Doc’s drums sound like insane-fast-in-your-face pounding, which by the way forced Peter (vocal, guitar) to write two extra tracks to get to the half-hour mark.

The Album starts with classic Vader, a death metal pound-out called "Wings". Without leaving you for any room to breathe, "The One Made of Dreams" attacks you with brutal precision and technical brilliance that is so rarely encountered in this genre. Then "Xeper", a little slower but with powerful guitar riffs that were made with live performances in mind will just blow your mind and throw you against the wall. Since the whole disk consists exclusively of highlights I’ll stop here. You just have to hear it for yourself!

If you haven’t heard them yet (what the fuck where you doing for the last 10 years???), you couldn’t ask for a better time. It’s not only the best Vader product, it’s an instant death metal classic. What else does "Reign In Blood" have to do with "Litany"? I believe that 10 years from now we will look at this album as one of the best death metal albums ever, but for now run to you nearest store and buy this masterpiece. You will not regret a single penny.