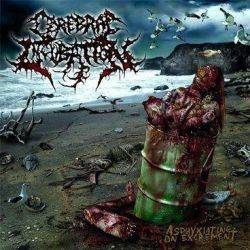 When it comes to slam, or specifically brutal slamming death metal, one of the key elements most people look for is that raw unfiltered sound, and this album has JUST that. Some people hate on or overlook this album because of the way it sounds, but it's the exact opposite for me. This is great, brutal slamming death metal that's raw as ever, perfect as can be, and one of the best albums in the "slam" genre. I was born and raised in Vegas, and to know that this amazing band hails from my hometown makes me feel great inside knowing such greatness comes from where I came from.

Again, the main standpoint of this album is the sound. It's raw, dirty, cheap, it's just so good. Apparently this album isn't well produced according to some people but for me I think that's what makes this album so good. Produced or not, it sounds perfect and exactly what we need. The snare drum is extremely clanky and loud, the guitar is raw, and the vocals are straight up gurgly burps. The bass is practically unneeded because the guitar is very stood out and you never hear the bass except on the only-bass parts, which appears about 1-2 times throughout the whole album. As I've already said, this can’t get any better! All the instruments work together in perfect harmony, sounding unprocessed and disgusting as can be, successfully proving an amazing listening experience. For example, let me compare this record to Devourment's "Molesting the Decapitated". One of the biggest reasons why people love that record is because the drums are clanky, guitars are raw and dark-sounding, and the vocals are burped & growled to perfection. This album is just that, similar to "Molesting the Decapitated", a highly acclaimed album famous for it's putrid sound, which brings us right back to this Cerebral Incubation record.

There isn't really a bad moment in this album at all. If you're a huge slamming brutal death fan you'll most likely not have any issues with this album. For a 20-minute record, this has a lot to offer. The songs are all cool and have different parts and sections that stand out. The drums are my favorite part about this album. Sure, you can have slam, but when you have slam with a disgusting, clanky snare, it makes it 1000 times better. Ricky Nunez is definitely an underrated drummer. Throughout the album he throws in some cool ass drum fills, it just adds on the greatness of this album. You're listening to some burpy slams and then suddenly everything stops and a little brief drum fill/solo hops right in and it's just so AWESOME. The vocals are so good, some of the best I've ever heard. There are several samples too which fits the album greatly. The lyrics revolve around humorous nonsense and violence, so there's a lot of amazing humorously retarded and explicit material. I just love listening to some nasty slam and then about halfway through the album there's a song that starts off with a sample that goes; "See what happens? See what happens Larry? SEE WHAT HAPPENS WHEN YOU FUCK A STRANGER IN THE ASS?!? DO YOU SEE WHAT HAPPENS WHEN YOU FUCK A STRANGER IN THE ASS?!!?!!?!??!?" while the sound of a dude bashing another dude's head into some glass is playing in the background while he's screaming at him. It's just so good and so perfect and makes me happy. With samples like that and lyrics like:

"I am the rape master, I will rape fat bitches too they sometimes give me trouble I distract them with food, don't know why I can't control it, don't care 'cause it feels too good, I cut them open and remove all the intestine tubes if they're filled up with doo doo I eat it with a spoon, dude seriously try that doo doo you won't believe it's really good she was a gay ass Vegas so this poo is good for you, see continue on with my festering obsession I screw her intestine tubes I know it's wrong I cannot help it now a hallowed out shell of incest I will take thee and leave it gagged and strangled on a steak impaled engulfed in flames satisfaction for my lust of wet flesh I can now wait for my next drink sesh"

...this album just keeps on proving itself to be awesome and relentless in every aspect. You also can't go wrong with the cover, it matches the sound of the music perfectly. The music is raw, putrid, and trashy (in a great way), and that's exactly what's on the cover. Nasty awesome cover, nasty awesome music. It's a 2-in-2 win!

So yeah, this album is great for obvious reasons. I can understand why some people don't like it, but I like it for the same reasons that they don't like it. If you don't like this record keep giving it more and more tries, maybe one day it'll come to ya. But if you're a lover of some raw and filthy ass brutal slamming death, this album is perfect for you! Hail Cerebral Incubation and Viva Las Vegas!!!!!