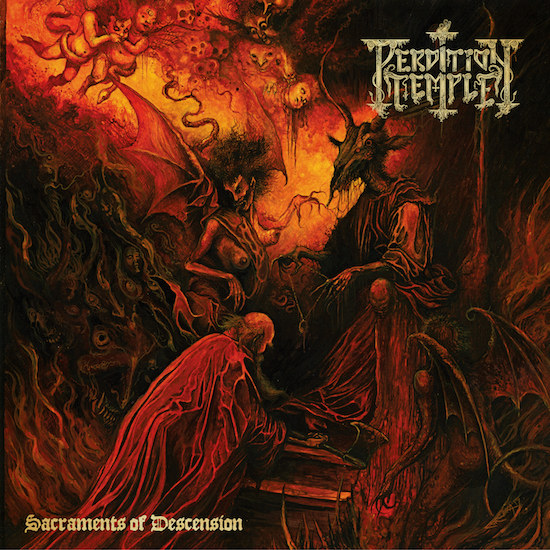 Perdition Temple are back faster, harder and darker; where have I heard that before?. No breaks just a thorough throbbing of blast beats and mangling vocal cords await the listener on Sacraments of Descension, the bands 3rd full length release. I've heard the name many a time but I'm only now getting to dive into their destructive styled death metal. Like it? Fuck yes! Even with the triggered drumming that could be a turn away if your musical criteria is as picky and strict as mine, but as always there's and exception to everything. Here in Sacrament of Descension, Perdition Temple spout a ransacking collection of tunes to devastate your setup.

From the onset of 'Nemesis Obsecration', the black/death bells of Perdition's Temple chime loud and clear with thrashing riffs and violent snare blasting. Swift transitions are made breaking away from the thrashing formula ever often and are further lifted by showy guitar work. A seemingly tame opener in comparison to songs further down the track listing, such as, 'Desolation Usurper' and 'Crypts of Massacre' that all appear to take an upward leap in technical proficiency in terms of song writing. Rather than relying on the safety of the thrash/black/death formula, successful attempts at involving a considerable amount of groove into the music to help out the fluency of the album. I hear a lot of Sinister (Netherlands) influences crawling around, bringing to memory albums the likes of "The Carnage Ending" and records around that period of the legendary band.

'Devil's Countess' has a climbing intensity unlike most tracks credit of the drumming that not only sits ready at the technical execution button but also has one hand seated near the switch toggling among rage levels. 'Carnal Harvest' and 'Crypts of Massacre' add to both the intensity and technical prowess incrementally, again borrowing some coloring and texture from the template of Sinister and even Suffocation. Most facets on Sacraments of Descension give off an early 2000s feel when bands were experimenting with the clean modern sound mostly in brutal death metal that proved effective to some avail; further leading me to believe had it been released around that 2004 - 2006 period, Sacraments of Descension would have been hailed alongside the memorable releases of that time frame.

The record is short and has tons of replay ability, my personal favorite track would have to be 'Antichrist' simply for that black metal tremolo section that reappears early-on. There's even that parading-war-march guitar sound I like to hear in black metal, plus a good-ole' death growl manifests at the beginning of the album. Long story short, Sacraments of Descension fucking wrecks shit!