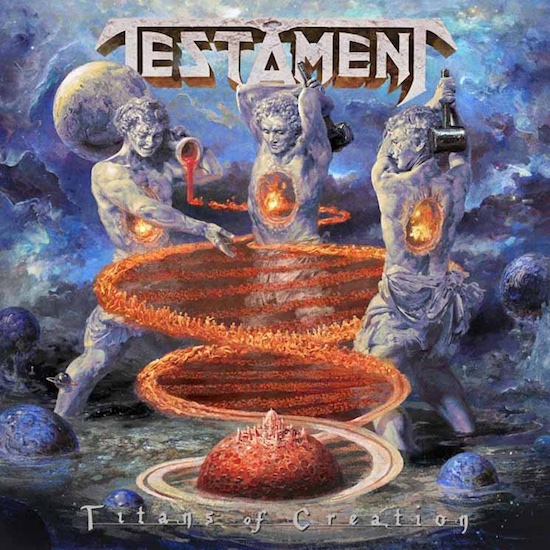 Testament has returned to glory with their new album Titans of Creation. This is a very solid return to form that sees the band competing with classics like The Gathering in fine fashion. The riffs are slightly more aggressive than on their last few albums and shine through nicely here. The album gets off to a strong start with some of the most memorable moments coming near the beginning of the work and showing a great amount of promise for things to come.

The album doesn't pack as much of a consistent punch as The Gathering, but it is more enjoyable than other albums that have appeared since then.  The riffs are just more crunchy and memorable than the last few outings. This album still does not strike the perfect balance between aggression and melody, however, and could still be improved upon greatly. It is still a smashing good time and the band seem like they’re having a lot of fun performing the tracks. The album gets off to a strong start with 'Children of the Next Level' and only lets up a little as the album progresses. There haven't been many memorable thrash releases in recent times, so this release is certainly welcome and appreciated. To be able to compete with the classics, Testament will need to try something a little different and progress in an exciting new direction.

The way the album starts off is promising, however, and shows off a band firing on all cylinders. It's heavy and much more satisfying than recent album like Brotherhood of the Snake, but still doesn't reach the band's most elite albums like The Gathering, Low and Practice What You Preach. I must say I was very impressed by the music found here and have hopes for the future of this band. Thrash fans should definitely check this material out.