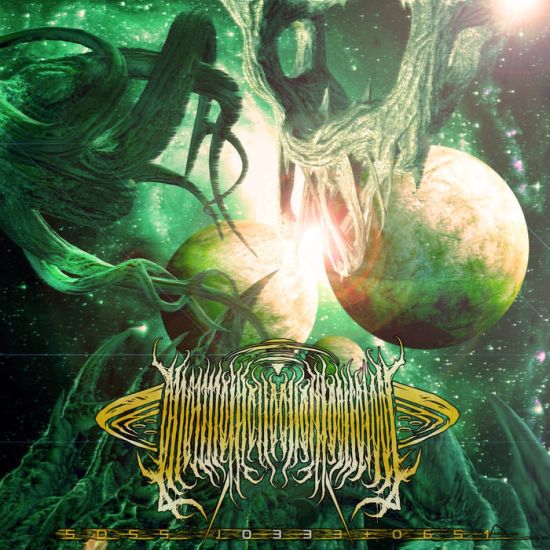 I'm so glad this band exists. Bands like this is why I absolutely love and adore brutal death metal; every band has a unique and original sound and style. 01101111011101100110111001101001 is one of those bands and that will blow you away once you hear any of their stuff, if you're a die-hard brutal death fan, of course. The EP they released back in 2017, S / 2 0 0 4 s 3 put them on the spot, it was cool and furious as well as being greatly questionable and interesting. That EP was so good, everyone who had heard it had been awaiting a full-length by this band, and the time has well come!!!!

The songwriting is so good, just like the EP. This album is brutal death metal with small slam influences and sections. The production is raw which is a great especially for this genre in specific. It's also kinda buried too, but again, it's just the band's style. The buried aspects of the production are part of the reason why this album sounds the way it sounds. All of the songs are different; different beginnings, intros, structures, etc. This isn't repetitive either, gladly. This album also features a re-recording of the first song they ever put out, their debut single "R * FP . NE . FL . FI . FC . L = N", and it's very good! Of course, the original is better, but to hear the song re-created in this album is very pleasing, I love it. The band does a good job and their own writing style makes it even better, which makes each and every song memorable and enjoyable. This is one of the bands that can successfully make every track sound special with their excellent way of writing their songs.

I don't really have anything negative to say about this. I've been waiting for their full length for as long as I can remember and there's nothing really to complain about. The only "issue" here is that the drumming is a LITTLE sloppy and draggish, but that's only in certain parts of some songs. It's not a bother at all, but it's a noticeable factor so that's why I had to deduct these 2 points. But overall, the entire album is good. The draggy parts of the drumming aren’t even an issue, it's just noticeable. Trust me, I don't want to say anything negative about this godly band since nothing they've put out sucked at all, but this was a VERY SMALL factor that I just had to point out a little bit.

What I like the most is the drum sound, the sound of the snare and the heavy beating sound of the bass drum is what structures this album. The snare is solid and cool and clanky, but not too clanky, this is a perfect snare, especially in brutal death. Then you got the guitars which have a certain trademark sound, when you hear the guitars you'll instantly know that you're listening to 01101111011101100110111001101001. The guitar sound in detail is heavy, as well as being kind of thin at the same time, similar to an extreme grind band. It's like grind guitars but heavier, a little slower, half slammified, and brutal sounding overall. Hopefully that makes sense. The bass guitar is amazing as can be, plumpy, heavy, slightly distorted, just how it should be, this band's material wouldn't be as great as it would be without the bass. The way this bass sounds specifically is how I love it in brutal death metal, as the band Putridity has the same bass sound as well. This is the ideal and perfect bass sound. The vocal performance is also is amazing as can be, this is expected from this band, they pretty much have their own playing style for every instrument. The vocals on this album are deep gutturals that are slightly muffled and gurgled, so it's pretty much your average brutal death vocals, but with more structure and slighter. It's nowhere near some Enmity crap, it's like a mix of Gorgasm and Putridity vocals. The brutal-slamming songwriting mixed with these deep muffled vocals is so good. This release is very heavy. Every second from the start to the end is a brutal heavy eargasm! As I've said before, this album is exactly what I, along with all the other fans of this band, have been expecting. This is gold. Goodness.

Another successful and flawless release yet again by this underrated band. They've taken the sound and style of their early songs and crafted them differently. It's still the old great 01101111011101100110111001101001 as it was when they first came out, but with more heaviness and more slam vibes than any other stuff they've put out. I personally prefer to refer this band as only brutal death metal, but it's obvious they aren't JUST brutal death, this is brutal death with slam influences, especially with SDSS J0333+0651, this is their most slammy sounding release ever. Once you listen this will keep pulling you back to it over and over. That's the beauty of this band, you just can't and won't stop listening to them.

Great job guys. The fans have been waiting for this, and it's here! This definitely couldn't have been better. This material is underrated as hell, and this band deserves more attention overall. If you like brutal death metal and you don't know this band, I highly recommend for you to listen to this immediately. Thank me later. What a masterpiece. This is one of THE ABSOLUTE BEST of 2019.