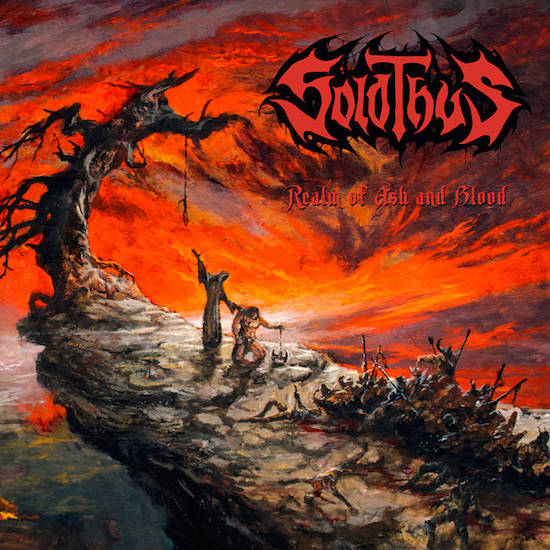 20 Buck Spin has become the de facto label nowadays for death/doom; i.e. bands that were too slow for Dark Descent. It wasn't always that way - remember that Liturgy was on this label's roster at one point, but I'm assuming the rousing success of Tomb Mold inspired them to jump right on the bandwagon, as is evidenced by bands like Superstition, Cerebral Rot and Witch Vomit. For an aficionado of the style, this label is likely a treasure trove, but for those of us that prefer death/doom on select occasions the bands start to blur together after a while.

Solothus has the benefit of having a couple albums already under their belt, allowing them to define their style and identity more thoroughly. Unlike a good chunk of 20BS bands that are all about the bouncy caveman riffs, Realm of Ash and Blood is a pensive, desolate affair, emphasizing doom over death. By definition it is lurching, repetitive and consistently ominous in its execution. Upon first listen it can be hard to gauge what Solothus has going for them over other bands, but as time goes on there's a melancholic sense of melody that brings itself to the surface. A common route for bands in this genre to go is to cake the songs in filth, but there's a clarity to the harmonized riffs on this album that could only have been cooked up by some sad, lonely Finns.

Even with the occasional forays into more inviting guitarwork, Realm of Ash and Blood retains its heaviness and airtight atmosphere. The warm, dry riff bed steadily pulsates as a more delicate but equally tense guitar line circles overtop. The dynamics are subtle, and aside from the brief break that 'Last Breath' provides, most of the respite comes from the leads and solos. The opening of the final track, 'A Rain of Ash', is the only thing on this album that I would describe as "upbeat" or "energetic", and even that's a stretch, and it's followed by seven minutes of the same sub-100BPM turmoil that was going on before. 'The Watcher' is the clear single on this one, not to say it's any less dreary than any of the other tracks, it's just a little more condensed in structure. The drums serve as a skeleton and pace keeper and opt to not add much extra spice, they’re pure, disgusting doom, with very little outside influence.

The consistency of this album is both its strong suit and weak point. While Solothus does a good job of keeping you engaged with very minimal guitarwork, their steady vibe prevents them from reaching heights that are truly magical. I often find myself wishing the band went a little deeper into their melodic leads, which is something the closing track actually does very well, but it's a long, treacherous, and at times monotonous road getting there, and it's not always a path I'm in the mood to take. This is basically Hooded Menace if they recruited one of Insomnium's guitarists, which makes for a slightly more palatable mixture, but still one that will likely only appeal to doom junkies. In all likelihood, you probably already knew if you liked this or not before you even heard a note of the music.