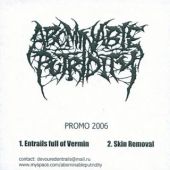 For a debut promo, this is pretty solid and promising. The production is clean, you can distinguish between all the instruments, and everything is just overall a good effort. My favorite thing about this are the drums, the snare is absolutely perfect and has a clanky clean sound, the drums remind me of Mutilated's debut album, "Devirginated Genital Pulp", the drums sound almost exactly identical I'd say. This is pretty much Mutilated's debut album if it was a slam/bdm record.

'Entrails Full of Vermin' is no doubt one of the best slam brutal death metal songs to ever be written, and this demo version of it is so damn good. As I've said previously, the entire aspect of this album being generally good is the fact that it’s so clean and has top-notch production. A demo is the sample of a song(s) before it comes out, 'Entrails Full of Vermin' is one of the best tracks that slam/bdm has ever given us, and its pre-result as a demo is flawless. You can actually hear the entire song clearly; every slam, snare hit, etc. I'm just in love with the song's demo version, it's great.

'Skin Removal' is just alright, it isn't bad but it isn’t as clean or flawless as 'Entrails Full Of Vermin'. The guitars sound more jerk-y and loose and slightly grindy and the snare sounds looser and less solid. Not as great as the other song, but it's passable. Good song and better on the debut LP, but the demo version is just decent.

The vocals are great too, they're better on the band's debut album but they're awesome here as well. Vladmir is a great and underrated brutal death vocalist in my opinion. He gets a fair share of hate from his lack of vocal structure and change, which I understand; but that's exactly what I like about him. I like my slamming brutal death metal to be nasty and guttural, which is the reason why I admire Vladmir's work.

So once again, not bad; not bad at all. Great production, the fact that this is a demo and it sounds that great makes it even better, and the drums sound great as can be (mainly and specifically on 'Entrails Full of Vermin'). Not bad at all for a band's promo. Great job on this.