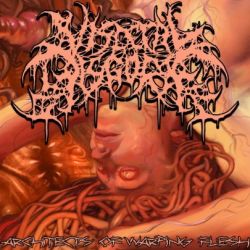 Visceral Disgorge has been acclaimed for creating an album that blends together three different genres together perfectly; brutal death metal, slam, and deathcore. Ingesting Putridity is one of the best things to ever happen to death metal, and when the band announced their first album in 8 years called Slithering Evisceration, fans became very excited.

As you can already tell by this single, the band's sound has changed quite a bit. This song is heavily influenced by deathcore, but still has everything else (brutal death and slam), but this is more of a brutal slam song hyper played like deathcore. For example, take any track from Ingesting Putridity and speed it up about ×3 and make it sound more like a deathcore song. That's pretty much this song in a nutshell.

Now yeah, this sounds nothing like the Visceral Disgorge we love and know, and when we all heard this single for the first time, we were all very confused and reacted negatively because what they gave us to preview after all these years for the upcoming new album is quite odd. But the truth is that this isn't necessarily bad. Sure, this new stuff is more on the deathcore side, but at least it isn't pure deathcore unlike all these other bands that used to be brutal death/slam and are now releasing pure deathcore garbage. Don't forget, this is Visceral Disgorge we're talking about, the same guys who put out Ingesting Putridity and shocked everyone with their amazingness.

The main issue you'll notice with this song is the drums. They sound heavily processed and unreal. The snare sounds like plastic and the hi-hat sounds puny and thin. It’s not really that horrible once you listen to the song over and over, for this is definitely a grower. Once you start to establish the sound and style of the guitars, the drums actually start to sound less weird. Deathcore often uses weird sounding drum sets that fit in their specific needs, so because this is a heavily deathcore-influenced track, it all starts to click together sooner or later. There aren’t really any other issues that much except for the weird sounding-drums, and that the band is starting to sound more deathcore. Just to clarify, the drums are only bad on the first listen. It grows on you. The drums aren’t bad.

These guitars are great and are very heavy. It’s pretty much the same as how the guitars sounded on Ingesting Putridity, but with slight tweaks like a slightly more up-tuned sound, played faster, and way more distorted. On the sections where the drums ultra-blast, the guitar is played at the same speed with the same furiousness, and wow, its fucking heavy for sure. These parts are the best parts in the song. The guitar work overall is just downright great, and again; VERY HEAVY. Great stuff. The guitars get an A+ from me.

Vocals have had a minor change, the singer introduces some small pig squeals and a more higher-guttural sound in general, that’s about it.

Nothing about this track is bad to be honest, when you first listen you'll be confused and disappointed, and feel like you've been ripped off. But if you keep listening over and over it'll grow on you. This song isn't bad. Just a new change we have to get used to. Give it some time, this is some quality stuff. Don't assume the upcoming album will be bad, just give it a chance, we got some new Visceral Disgorge coming!