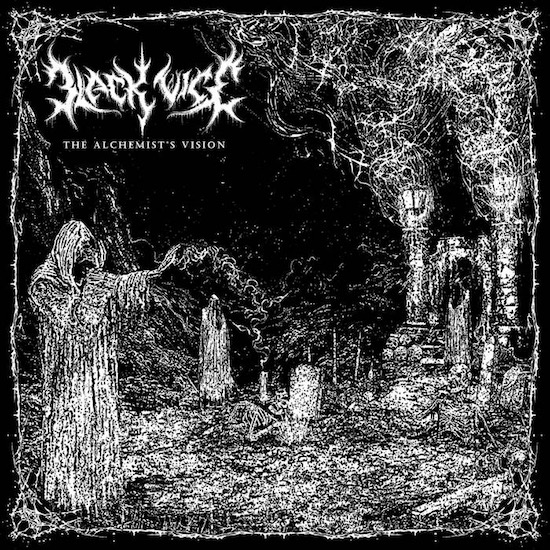 Surely the United States of America has seen many a metal band but none quite the likes of Black Vice; oddly emerging from Austin, Texas where it'd be by 100% default you encounter a stoner/doom/rock band before finding any other type of metal existing in the region.

Adding to the peculiar charm of Black Vice's second album (pardon my manners for not mentioning earlier) The Alchemist's Vision, is the artwork that does not echo that of black metal, instead comes as an apparition of death metal and a rather stellar piece at that. But enough talk of assumed and expected formalities, does the agenda of Black Vice appeal to the ears and preferences of any listener?; speaking for myself, given the fact of the matter a review has even been written denotes the quality of the music in question.

The Alchemist's Vision is one that detonates without warning, a sudden explosion of both death and early to mid-90s black metal. Had one no knowledge of the band's location, the assumption and classification as a Belgian or German black metal output would not have been unreasonable or inaccurate. This record's identity finds itself humbly situated within the geographic black metal regions of Europe in the mid-90s with a somewhat cavernous presence emitted of course.

Anointed by a cold, drizzling, fast to mid-paced motility, The Alchemist's Vision surrounds the listener with an infinite stretch the moment power-chords can be heard from 'Ontogenesis'. Priming for a torrent of riffs, the album puts to work mid-ranged doom metal chord-progression before sliding down a fountain and submerging the listener in a lake of guitar ecstasy. 'Ontogenesis' sets the tone and the rest follows with 'Emergence' continuing the hypnotic instrumental sway, reaching its juicy peak as tremolo picking expands into a melancholic-melodic-massage.

Onward to 'Vision', 'Attainment' and 'Salvation', the riffing takes on an even stronger structure adding a rhythmic depth to The Alchemist's Vision. You'd feel the urge to move your hands in an elegant fashion as though conducting an orchestra once struck by the guitar caress on any given song.

The vocals and drumming provide the meat of the record whilst sharing an intimacy with the guitaring, and as a combinative force, flows with a pacing reminiscent of early Scandinavian black metal. Like a titan, 'Salvation' does some powerlifting that transcends the entire feel of the album to something near tangible through a candescent groove illuminating the music; thus, extended by the ambient intervals on 'Creation' and 'Erasure'. This sensory stronghold on The Alchemist's Vision reflects and gives testimony to the record's title as an exteroception and a piece magnified. An album deserving to be heard by many in the black metal underground.