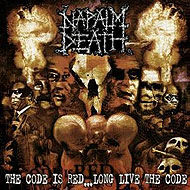 Type: Full-Length
Release Date: April 25th, 2005
Label: Century Media Records
Genre: Death, Grindcore
1 Silence Is Deafening
2 Right You Are
3 Diplomatic Immunity
4 The Code Is Red... Long Live The Code
5 Climate Controllers
6 Instruments Of Persuasion
7 The Great And The Good
8 Sold Short
9 All Hail The Grey Dawn
10 Vegetative State
11 Pay For The Privilege Of Breathing
12 Pledge Yourself To You
13 Striding Purposefully Backwards
14 Morale
15 Our Pain Is Their Power
MetalBite on YouTube
MetalBite on YouTube

Ever since Scum and The Peel Sessions came out, I was hooked on this band. Even though they play more death metal (especially on this one) it hasn't shied me away from liking this band. So on The Code Is Red...Long Live The Code, you'll hear a more ND death metal approach to their music. Though there is blast beating by Danny on here, it's mostly just fast riffing that's mixed. This is more of a death metal approach to music on here, as opposed to the old line-up producing sheer and utter noise-grindcore. I kind of miss that about the band and thought that Harmony Corruption (and still do) was their greatest times.

I admire the fact that the music on here varies but miss the intensity of the old Napalm Death. At least they're still making music though they're veterans now. Barney's vocals changed after Death By Manipulation. It's not as low and he doesn't do the loud massive roars like Barney of the old. But now they have Mitch contributing screams periodically. Screams ups the variety and keeps you guessing. A still highly politically based band lyrically but the focus is on the music, not so much the lyrics. A lot of songs on here too, that's why they split it up. The guitar is pretty unique though the riff quality is nowhere near as good as on Harmony Corruption.

It's fresh meat though, even though this was released in 2005. It's pretty new to me because it's the first time hearing this album. I don't necessarily like the slower stuff near the ending of the album, but for the bulk of it, it's a "B". I felt that they measured up to their standards. And the fact that this is death metal and not grindcore anymore, they still are pretty much the founders of that genre. I think it'd possibly be Mitch making the turn into death metal and it's a big loss that ND doesn't have Jesse anymore. Died too young, that's for sure. I think Napalm Death wanted a change because the only real original member is Shane. Even he came later however.

I liked this album enough to write about it. I thought that the musical quality was good, just that they should've taken out the outros. They should've just ended at track 13 and that's it. But they squeezed in two unnecessary tracks. I guess that that's how they wanted it to be though. A big transformation from them then I used to know. Especially listening to The Peel Sessions in High School. It seems as though now that there's less fire in the band because of the lack of Mick, Lee and Bill, they should've changed their name. They aren't losing their fire entirely, but let's see how they sound if they're releasing a new album in 2020.