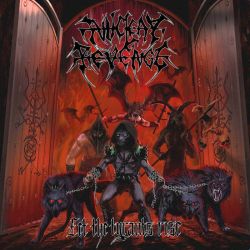 The great thrash revival seems to abate and one thing is for sure, albums like Let the Tyrants Rise do not have the power to reverse the trend. No, Nuclear Revenge do not offer lukewarm or half-baked tracks that lack energy. Quite the opposite, the compact full-length is recommendable, at least from my point of view. But I am a member of a minority. I stay loyal to thrash metal, come hell or high water, and this is a rare characteristic in a world with ten new black metal promos each day. Broad parts of the extreme metal scene are seemingly more interested in another style and this makes it difficult for troops like the Spanish three-piece to attract the attention of a great number of listeners.

The generic Let the Tyrants Rise is almost pure thrash. Okay, it also dishes up a few blackened elements and a song like “Last Beer” could also have been written by a punk band gone wild. Nevertheless, 90 + X percent of this work can be learned in the school of thrash. But don’t jump to conclusions - the dudes of Nuclear Revenge are clever enough to avoid a simple retro approach. Moreover, there are no obvious godfathers. The material does not sound like Testament, Exodus or any other of the big subgenre names. The consistently swift compositions rather send greetings to the first albums of Toxic Holocaust. With that said, it needs no further explanation that you will not find a single gram of fat here. Everything is stripped down to the essentials. A mangy vocalist (who simultaneously shreds his guitar while playing cutting riffs and short solos) is accompanied by a drummer who is overpowered by his own adrenalin and a bass player who fills any conceivable sound gap. Almost every song rushes by with an enormous velocity and only a few sections, for example the intro of the closer, give the audience room to breathe.

Now I hear some of you scream “so many albums have already been filled with generic old school thrash to the brim, so who the hell needs another one?” With all due respect, I do (and hopefully some other thrash aficionados as well). Nuclear Revenge do not offer a mega-hit, but the dudes have evidently bumblebees in their asses and the fact that they cannot sit still leads to explosive outbursts. More or less all tracks make fun and so you can select “Ancient Rites”, “Victims of the Black Flame”, “Lucifer’s Slave”, “Burn the Holy Cross” (totally new idea!) or whatever you want: you will get a proper storm of sharp riffs, high speed and mean vocals. Of course, the lyrics are rather strange than terrifying (“as you take your last breath let the ancient rites begin” – when taking the last breath it is probably a little bit late to start something new, if I am not mistaken), but who cares about the poetry when it comes to raw thrash? More relevant is that the eleven songs benefit from a sharp production which combines a certain degree of filth with a higher level of transparency. Let the Tyrants Rise is another fist in the face of those people who always like to sing the requiem for thrash, even though the compositions will not win new fans for the subgenre. But I like them.