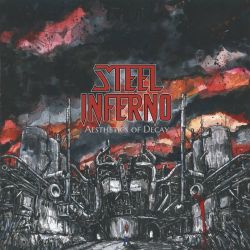 Maybe I am wrong, but this album cannot be labelled as heavy metal. It has not much in common with the works of bands such as Mystic Prophecy or Grand Magus that represent different facets of modern heavy metal. Aesthetics of Decay gives a home to fanatic speed / thrash hybrids. In terms of quality and more or less in terms of style, their songs stand in the tradition of many Artillery tracks and that's pretty stunning. Already the first two tracks enrich the Danish thrash treasury in view of their absolutely energizing, straightforward and restless approach. Obviously, Steel Inferno did not join the scene in order to hide their light under the bushel. Come on, try to be not infused by the effervescent "City Lights" when listening to this irresistible killer for the first time. Attempt to stay apathetically while being confronted with the devastating title track. Its heavyweight guitars, its rapid rhythms and the tinge of oriental harmonies at the beginning that seems to hail Artillery's "Khomaniac" - all these details make clear that resistance is futile. This song provides evidence that passiveness and indolence can be destroyed in a matter of seconds. Believe me, I thought Steel Inferno are just another interesting newcomer, but what the hell is happening here?

The quintet is able to create this infectious element that draws the listener into their songs. Sometimes stomping, sometimes swift as an arrow, the songs score with many exciting ingredients. The riffs do not lack sharpness, the feminine vocals of Karen bring Dawn Crosby back to my mind, although Karen is much more flexible, and the punk element of Détente is missing. Unlike some of her female colleagues, Karen sounds like a real woman every now and then - little joke... She does not imitate the diabolic nagging of Sabina Classen and she cannot be compared with the ridiculous elves of all these fairly terrible "beauty-and-the-beast" albums. It remains a mystery why she is not responsible for the lead vocals of the fourth track, because her approach reflects strength and self-confidence in a pretty natural way, and this is something I like very much. As long as girls are happy to be girls and boys are happy to be boys, the world has a good perspective.

All songs have a logical configuration with edges and corners and wallow in their own heavy fundament. There are absolutely no details that indicate any form of half-heartedness. "Merciful Slayer" hails the speed and thrash heroes again with its straight, direct and fast pattern. Both its flattening riffing during the instrumental part and the formative velocity explain why the thrash metal kings of the mid-eighties show up in the song title. By contrast, tracks like "Defender of the Old Ways" or "Dismantling Fixed Positions" rather underline the traditional side of the group. Okay, the band members wear shirts of Thin Lizzy, Sortilège and Judas ("Screaming for Vengeance"), but don't be fooled by these textiles. The pretty massive sound of Aesthetics of Decay pulverizes the works of these veterans. It presses the listener against the wall, albeit the bass guitar has to struggle in order to be heard. Yet apart from this minor detail, the mix is well balanced. It does not only set the right frame for the almost apocalyptic riffing of "Flashing Reality", another sharp and thrash-affine eruption with great lyrics about "entertainment grown from the lowest common denominator". The production does justice to all tracks, to the speedy eruptions as well as to the mid-tempo-based monsters.

The vinyl edition does not contain the cover version and the running order of the tracks is slightly different. Frankly spoken, a missing cover is mostly the best cover one can get. Anyway, this is the first full-length of a talented, robust and assertive formation. Steel Inferno, the name might not be the child of a creative flash, have proven that they can provide a breath of fresh air for a scene that sometimes is in danger to lose its energetic appearance. Their song formula combines vehemence with the necessary quantum of melodies and all ten pieces hit the target. I want more and, of course, my advice is to check this album as soon as possible.