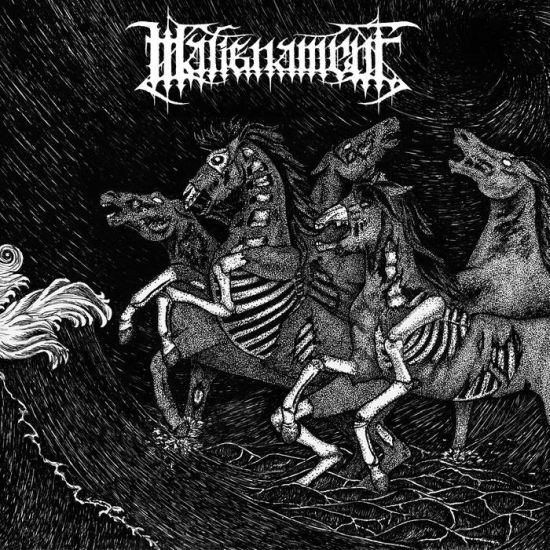 Back in the nostalgically idealized eighties, tape trading was a kind of conspiratorial work. Spinning a net all over the world to brothers and sisters in spirit and getting a sonic reward via letterbox from time to time was inspiring. Well, I think it was this way, because my own experiences with tape trading are not worth mentioning. I was mostly too lazy to get in touch with other people. However, I am the proud owner of precisely two demos, Legacy (Testament) and Poison.

Today things are easier and less mysterious. Thus, Malignament from Finland were able to release their Demo I via Purity Through Fire. It’s no tape any longer but a single-sided vinyl with three songs, lyrics sheet and stylish design. I did not hesitate to buy it, because the music attracted me in a matter of seconds. The gigantic opener 'Call to Arms' needs no intro. It bundles all qualities of black metal right from the start. Enchanted melodies meet violent energy, nightly atmosphere liaises with triumphant fanfares of the hordes from the underworld. The band does not work with many breaks, but if they do so, they set them extremely effective. The inflammatory first words of the lead vocals appear at precisely the right time. This is definitely a “Call to Arms”. While managing the typical Finnish sounds cleverly, the band creates another dark galaxy where any ray of light fights a losing battle.

'Bloodlust' is no Venom cover. Nevertheless, it pays tribute to another old hero. Its sound is less differentiated than that of the first two tracks. This piece has a rawer, almost dull production and so the guitars are not too far away from the pandemonium of Bathory’s “The Return….”. Anyway, the skilfully arranged song pattern shows impressively that Malignament do not get lost in a primitive approach. The tempo changes lend 'Bloodlust' a very lively appearance and every second of the song is worth listening.

Finally, 'Wolf and the Moon' lies between the two aforementioned tracks. This piece marks another example for smoothly flowing yet aggressive and dark black metal with adequately brusque vocals. It’s always a pleasure to see that newcomers are able to find the right balance between melody and relentlessness and Malignament are successful in doing so. In a nutshell, Purity Through Fire have excavated a true gem of the boiling Finnish underground. What about a second demo or a first official full-length?

Demo I by Malignament out through the ever rising to power Purity Through Fire, is an upheaval of mid 90s Scandinavian black metal magnetized to the march of battle and the sorcerers’ lunar spells.

‘A Call to Arms’ makes known its military presence, victorious tremolo riffing, lo-fi drumming and commanding bellows of a blackened tongue marks the once virgin ground, a now deflowered battlefield. Howl at the moon in a cry of lamenting sworn vengeance as ‘Wolf and the Moon’ plays for the pack before the commencement of the hunt. The thirst for enemy blood is strong on ‘Bloodlust’ bringing the short sprint through adversarial territory plunging deep the fangs of a lycanthropic coalition into the now preyed upon. By the blink of an eye you may miss the swipe of the blade or the lunge at you from the dark if keen attention is not maintained, but even such is near impossible due to the sonic gaze instituted on this demo. Like the whiff of a fine perfume that dissipates delicately, you’re left to wonder what fragrance did elegantly pass the nostril.

One would hope there is more to follow these precipitated proceedings all the while humbled before the flame of a time long gone. To satisfactory scale Malignament’s debut demo has taken the fruits of 2nd wave black metal and merged it with poignant yet all the while, mystical-auric-arousals attired for the kill. Whatever your faction, suit up and with banners high march forth before the tribal wails for recompense and sacrifice.