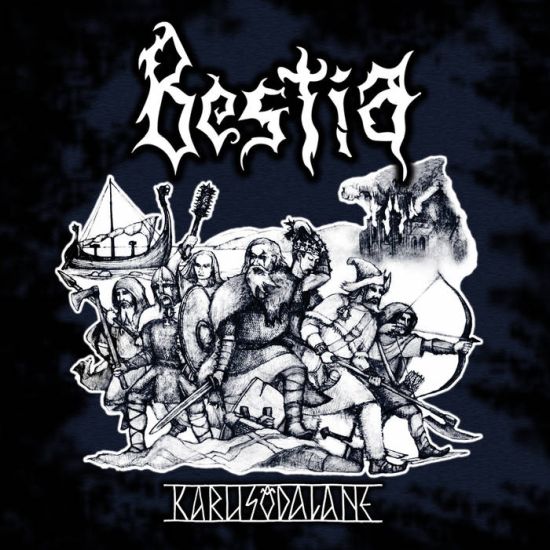 The unforgiving chill and frostbite of winter is upon us and pagan black metal band Bestia have with them 9 tunes to accompany the freezing temperatures. Karusõdalane is the band's 3rd full length record in a decade since Ronkade Parved in which I would have by now took up the liberty of inquiring the music featured on. I'd prefer their latest album Karusõdalane be the primary entry point and original impression of their music than to rely on the past which may/may not be so good to guide my perceptions. Pagan black metal can oftentimes fall on the wrong side of the spectrum; there's two types of pagan black metal in my view, the boring kind (black metal diluted or completely lost due to an abuse of folk and ambient elements) and the other kind that sounds like a medieval battle ongoing. Bestia's Karusõdalane falls on the latter and has much feeling to accompany it. With that out the way, the music on Karusõdalane can take the spotlight as intended; branded as pagan black metal but is not held back by its categorization as often times it crosses the stream into 2nd wave black metal territory. Keyboards are usually a thing of ambient black metal and on here such makes an appearance in providing the music with an epic feeling.

Though I am not the biggest supporter of pagan black metal I have heard some fantastic albums, also those of not so much of a favorable mark, some dark, while others have a lighthearted feel. Karusõdalane is a mixture of both you could say, some moments stand out as being foreboding whilst others lighten the mood. It’s a battle between opposing forces but also exists within a grey area of sorts almost as if it’s not sure which way it wants to go. However, instead of appearing to be a weakness of Bestia, that space of uncertainty comes as a massive strength that keeps the listener hanging on every note not sure of what else would spring forth. The element of unpredictability is important in black metal as often times the genre can grow stale. The opening track 'Karusõdalane' has that which I speak of; identifiably epic black metal without the plague of repetition. There's enough diversity in riffs, drum and synth schematics but also a stringent temperature of commitment to what the sub-genre is all about.

You’ll be made aware immediately of the snare tone that is not punchy at all, instead its almost faint/lo-fi, but this is not to be seen as a downfall being it gives the music an organic sound matching with the rest of the instrumental temperament. This is one filled with many good leading riffs and ambient sounds in the spirit of 2nd wave symphonic black metal. Songs like ‘Sokutants’, ‘Idaviiking’ and ‘Ebaõnnistus’ invite feelings of triumph all the while painting atmospheres of mystique and a tad bit of lament, they’re some of the highlight tunes on Karusõdalane which is a thoroughly well thought out and strong album. I can’t get over how well the synth is used on the record, venturing down to ‘Tüdinud Tühjusest’ and ‘Talveöös’ you can't help but notice the album becoming stronger through guitar and complimenting ambient work rivaling each other but at the same time seated in a mutual understanding of accomplishing the final goal. The entire album is strong and becomes an even more exhilarating experience with each new listening session. You’ll find it difficult skipping through songs due to the cohesive feel the album carries and sustains all the way through. Released on CD through Hexenreich Records and Careless Records also digitally on Bandcamp, Karusõdalane should be in your collection if you have a passion for the pagan black metal craft. A noteworthy effort from Bestia that would spike your interest in their back catalog and the genre if anything.