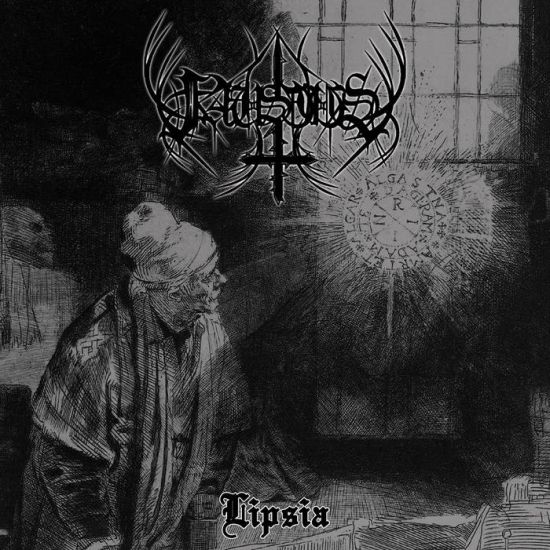 Faustus is a jewel of the underground, I must say. It represents almost an optimal state of raw black metal, a genre with a strong focus on the atmosphere and the melodies instead of a high level of technical performance.

The intro contains several archived wind sounds, which are covered by noise as it approaches its end. Admittedly, intros are not necessarily a good addition to most albums, but the sheer cold atmosphere immediately threw me into the scene, and I just can't listen to this EP again without hearing it. The first real track on the album is 'Die Natur ist Sünde, Geist ist Teufel', German for "Die Natur ist Sünde, der Geist ist der Teufel" and a quotation from Goethe, which matches the Faust reference on the artwork and the band name. It's very exciting to watch how the atmosphere slowly builds up and develops in a sad and very cold direction, which is simply the main feature of this EP. The harsh vocals of Resurgemus simply cut through the sound of the guitars and despite its incomprehensibility, it is very pleasant as it melts with the music.

Resurgemus, the vocalist and guitarist on this album, has done an incredible job. The sound of his riffs is typical for the raw and atmospheric nature of early German black metal and can be compared to many bands from the transition of millennia. The riffs are technically not too complex, but more than justify themselves by the skillful use of the fuzzy sound. The production quality is comparable to a recording made with a Nokia 3310 in a basement, but that's where part of the charm lies. Good production quality is not necessary with metal as long as the available resources are used intelligently, which is the case here.

Asbath was responsible for the drums and did a pretty decent job. His style is not too much based on blasting parts, which are quite pleasant and can be found on this album at certain times. The overall sound was not too loud, which is a very wise decision for this kind of music, as the focus should remain on the melodic and dark tones of the guitars. I was not openly impressed, but I am certainly far from being disappointed by the drums.

The general concept behind the album is not too original, the usual anti-Christian and occult themes dominate the visual language of the band. However, there is one aspect that surprised me a little bit; the whole concept around Faust, Goethe's most prominent figure, fits too well with the idea of black metal. I really enjoyed the music with its hypnotic and cold riffs, which put me into a little trance for a few moments.

I hope that this EP marks the revival of Faustus and that there will be more releases of this kind in the future, and until then, listen to this, you won't be disappointed.

Faustus appears to be a Darkestrah side-project of sorts, as the only two members in the band play there. Asbath has proved himself a pretty capable drummer in his main band multiple times over; his blastbeat steadiness in particular is extremely impressive. Knowing that he plays on this, you know there’s a good baseline for quality, which immediately makes it more professional than a good chunk of raw black metal you’ll stumble across. The timeline for this is also fairly interesting. The project has apparently been around since 2000, but aside from a 2004 demo that I can’t find much info on anywhere online, Faustus hasn’t put anything else out, so we’re looking at a 15-year gap between releases here. Perhaps this is just some cutting room floor stuff from back then that didn’t really fit in the main band? If this was written in the early 2000s, that'd be especially dope, because early Darkestrah albums are hidden gems in 21st-century black metal (also you can say you listen to a band from Kyrgyzstan!).

Faustus seems a lot less melodic and a lot more...iunno, dark? Occult? Darkestrah’s a bit more subtle with their use of melody for a band with the “pagan folk/black” tag to begin with, but where you could also sometimes give them an “epic” tag, you can’t give that to Faustus. Lipsia is a very stark, singular release, hearkening back to the days where black metal albums were torrential blizzards of cold, tough tremolo riffs. Ideas are few among the songs - the shorter ones especially tend to repeat one main riff, and the drums just provide different rhythmic variations to give the song a bit of a rise and fall. Even the final track, which seems like it’s gonna be a longer journey, is actually just another 5-6-minute number with an additional 6 minutes of ticking over complete silence, like they all left the studio and kept the metronome running or something. The riffs are catchy in a really subtle way, not so much because they get stuck in your head but because they get repeated so much and the drums make different parts of the riff stand out with each new beat. It’s a good thing that there’s no terrible ideas on Lipsia, because there’s so few. Paysage d’Hiver is a good comparison to make with the minimalism, cold atmosphere, and steady, driving blasts, although Faustus has much clearer production and this is a bit further above demo-level in terms of overall presentation. (Paysage intentionally makes their stuff seems like raw demos, but still).

You can definitely hear the nods to "Embrace of Memory" on some of these songs ('Der Drudenfuß Auf Eurer Schwelle') in particular, which makes sense if this was actually recorded in 2004 (as the notes on this website say). By the mid-2010s, Darkestrah veered off into more of a folk direction, so perhaps the other members weren’t vibing with a harsh, tragic black metal aesthetic at this point in their lives and Asbath and Resurgemus still wanted the songs to get out there to the public. This won’t captivate anyone who isn’t a black metal fan already, but it’s got some above-average drumming and offers a bit of a darker theme on the epic folk vibe of Darkestrah, in case you were looking for that sort of thing. Darkestrah’s early stuff has a fantastically unique sense of melody and some incredible, longwinded pacing that never gets boring, and the cello and other folk elements they add are always tastefully done, adding something substantial without succumbing to gimmicks. (In case it wasn’t apparent, you should probably check out "Embrace of Memory" alongside this if you’re not familiar.) Lipsia doesn't quite reach the emotional heights of pre-2005 Darkestrah (perhaps that's why it was left off the full lengths in the first place) and doesn't offer a whole lot that you wouldn't be able to find elsewhere, but it's quality stuff nonetheless. If they expand on some of the ideas in a full-length followup, they could be on to something really cool here.

I’ll always take more music from artists that can make stuff that’s simple, fresh and engaging, even if it’s a moderately one-dimensional EP like Lipsia. At least that one dimension is pleasant enough to listen to for the 20 or so minutes that this is on.

First EP by German band Faustus titled Lipsia sees them draw a thin line between raw black metal and clarity, if such be an applicable term. Originally recorded in 2004, however only arisen to the surface in June 2019, is a commendable collection of songs and intermezzos playing to the old-garde era of raw Scandinavian black metal. Fully capable of standing its own ground, though you would pick up on the Darkthrone influence, Lipsia is without a doubt a record promising greater things to come from a band under the guide of the black flame. Lipsia shows it has the tools necessary to rise to the heights of an "In Total Contempt of All Life" or the likes of. The material here is robust enough to move the status of the band upwards though borrowing some aspects of the early 2nd wave. That said, having been recorded 15 years ago it would be good to hear how the duo's music has evolved structurally and atmospherically (if any) since. Vocally, its sharp and very true to the image of what most perceive to be raw black metal; same for the guitar and drum sequences, however, its production is quite decent and may even be a bit easy on the ears in comparison to a band like Black Cilice or the likes of. Then again why coat your music and hard work in static that may prove detrimental to its effect. Heavy footed on the distortion pedal, Faustus’ image resembles the face of traditionalism with the touch of synth buried far below to acquire depth and resonance.

'Natur ist Sünde, Geist ist Teufel' being the first real song following the instrumental ‘Brockenhexen’, is old-garde worship sound-wise, very Darkthrone with the addition of samples and changes in momentum. But the best of tracks would go to ‘Et Satan counduit le ba’, that though still in the lane of Darkthrone, has a way with handling fast and slow sequences. Hidden to the virgin ear are the synth (as mentioned earlier), though held under the punishing scrape of distortion, manages to escape through the cracks of low pitches. I am impressed at the music given it was recorded such a long time ago but still holds a torch of relevance and merit that suggests the possibility of growth in the band. Also, one must keep in mind with Lipsia being such a very old recording, judging it against current standards could be a frustrating endeavor given we haven't heard anything new from the band. The instrumental work is slightly questionable (in terms of placement and length) though understandable that Faustus may have wanted to provide added support to the album's overall atmosphere. Still not much is lost, with this revitalized effort, Faustus may be gearing up to fully invoke the winds of eldritch nights.