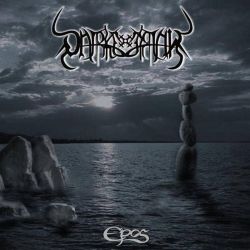 That's probably the one thing most metalheads like about metal and what keeps us coming back is that, regardless of what we've heard and how good we may think it is or may have been, beyond it, somewhere just a blink away, is a record that is better than your last best find just waiting to be dusted off and given the ritual-treatment for a spin on the turntable. Darkestrah put out Epos approximately 13 years ago as their 3rd full-length, here now in 2020 it reemerges in the line of sight for those who dare sit docile as its black waves' currents pull you beyond the safety of the seashore. Would you believe black metal could be so harsh yet so beautiful at the same time; if no, take a chance and listen to the wails of a submerged soul trapped by the beauty of things condemned beneath the sea. Sparkling with glory and delight, yet within its bosom of pleasures lies a beast whose siren bedazzles the ear and entrances the soul. From waltzing in its world of wonders to being just another thing stuck between its monstrous teeth but still struck and stunned by awe as you are being devoured, your essence is now but a star lost to the infinity of the deep. Postured as an epic black metal undertaking, Epos as a full length seems like laughter and giggles to the weary attempts of other bands trying desperately to achieve even a speck of relevance while toiling in vain to sound interesting, only to be defeated by an entity not even remotely bothered, much more aware of their presence.

To the sounds folk metal, warring pagan black metal machinery and the elegance of melodies sounding as though they were crafted by an outcast village witch, in just above 33 minutes tells of Darkestrah's patience with music and their elder-esque handling of forces familiar to many but mastered by few. Just as the sea is with humongous waves pushing intrusively upon the shore at its tidal peak, this one song builds a momentum ever intensifying taking the listener from a passive state to one of sudden dread that builds from its whispering malice to a fluorescent burst of Scandanivian black conflagration. Vocals tear, riffs play in fiery dance with the blast of the snare, altogether with a melody that both swings a sword admonishing onlookers and afflicting those daring enough to stand in the path of its manic yet magical display.

Soulful black metal is perhaps the best phrase one could apply to Darkestrah's work on Epos. Offering just enough to keep the replay button activated as the listener hopes to fetch something new in its net cast into this sea of mystifying yet dangerous tranquility. Risen to provide a lot more than just the average landscapes or to be consistent, seascapes, Darkestrah's folky water-work has brought us Epos, a 33-minute sonic oceanic rapture. Irresistible entropy, enlightenment all the same, an enveloping encore.