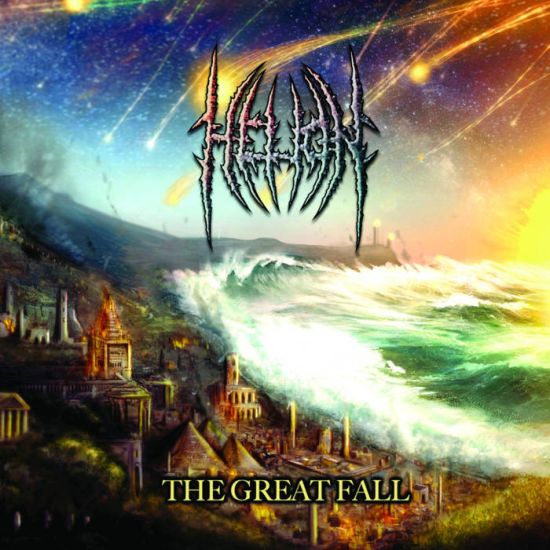 It's tough being any technical death metal band not named Archspire these days, because they've set the bar higher than any artist could realistically hope to accomplish. Max Cirelli had some lineup instability in the early days, so unfortunately his band's first full-length comes late to the game and not likely to draw anyone in based on sheer musical prowess alone. Not to say that this is technically lacking, far from it. In fact, I'm very pleased that an underground band actually sounds like competent tech-death - the amounts of local "tech death" bands I've heard that were just deathcore with a sweep riff or a time signature not in 4/4 is far too many to count, but given the speed of Alessandro Caruso's footwork mixed with the flamboyant melodies that drip out of every lead and solo, there's enough going on for the guitar nerds and speed freaks. If you're familiar with what tech death is laying down then this will have enough to satisfy.

Within that arena, Helion have an interesting take on the style. The almost-neoclassical vibe of the faster riffs and leads has that trademark Italian romanticism, like Equipoise listened to a bit more Rhapsody before going into the studio, but The Great Fall also likes to space out the overwhelming flurry of melody with the same sort of drawn-out crushing bits that Nile likes to use a lot (bonus points for the comparison because Helion also writes about Egyptian mythology). The drummer replicates George Kollias's footwork a lot (i.e. he just fuckin gives er, even when playing an otherwise simple beat), and they even seem to flirt with using Middle Eastern scales - 'The Aten Rises' and the slow build of the title track both give me that vibe, although I'm not enough of a theory guy to call it for sure. Whatever the case, it's got the same sort of pacing and build that a longer Nile song would. Occasional flourishes of ancient Egypt aside, this is much more reminiscent of Hour of Penance battery meets early Beyond Creation's melodic ear, all giving the foundation to that dramatic, sugary flair that only Italians can pull off.

The Great Fall avoids many of the common pitfalls of tech death: individual riffs are memorable, the songs aren't just riff slideshows without repetition and have a sense of beginning and end, and although the individual ability is impressive, the wanking never feels purposeless. If anything, I would prefer a tad more wanking, as sometimes the epic buildups to songs drag. I have the same problem with Nile - often the slow sections don't build energy, they just kind of stall for an inappropriate amount of time until they can go into a fast part again. On The Great Fall, the slower parts are almost always instrumental, when in some cases another vocal layer would have gone a long way in keeping my attention. It's really just a microcosm of me wishing the vocals were busier in the songs, though. I get that the guitarist is doing double duty and there's a lot of detail in a lot of those riffs, but it's death metal, not neoclassical shred, I need some more gritty rasping to ground the riffs. This is especially because Helion's polished tone and melodic phrasing can sometimes be little too slick, conjuring up more of a bouncy Black Dahlia Murder vibe. The mid-ranged rasp Cirelli has is perfectly competent, but just a bit more low end would have gone a long way.

Sometimes I start to wonder if Helion should recruit a guy who can do falsettos and go straight-up power metal, but the drum performance squishes that thought with a healthy amount of aggressive pummeling. Not only that but merging this specific flavor of Rhapsodyisms with death metal appears to be the shtick they're going for, sort of how First Fragment did it with neoclassical swing stuff. A slight tweak to the aesthetic of the vocals would really tie this together and give a distinct flavor, and with more succinct songwriting this would have been among the best tech death albums of the year. The good news is there's a lot of time to iron out the kinks. The Great Fall already has an abundance of talent and musicianship, so I can only see them getting better as the band's chemistry grows (as long as they can keep a stable lineup). When this album is going full blast, I'm 100% dialed in, and it they can follow up with something more consistent front-to-back they've got a home run brewing. For now, The Great Fall is a promising debut from a band with an intriguing take on tech.