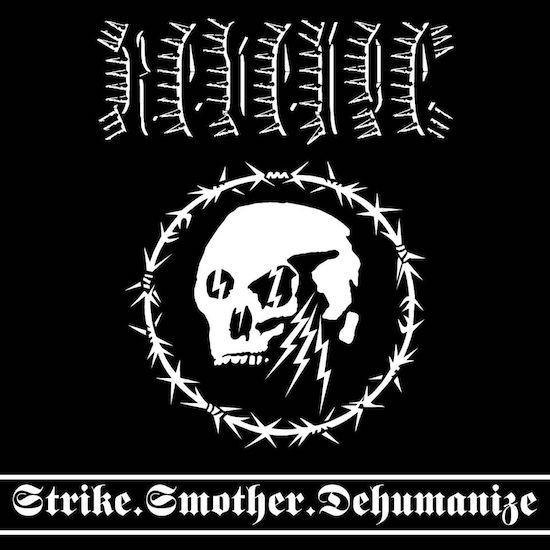 Continuing to strengthen the war metal diaphragm, Revenge not only return to do just that but also to add insult to injury given the current state of world affairs. Stamped-out and spat-on, the human race is left to endure a sonic laceration unlike anything ever felt. Strike.Smother.Dehumanize is yet another devastating addition of war metal artillery developed by none other than J. Read and fellow commando, Vermin. Through this unity, the long-standing torch of inhuman aggression remains lit with burning pride as the notorious name of Revenge continues to dismantle and disrupt with genocidal frequencies and tones.

From the mouth of the cannon, 'Reaper Abyss (Real Rain)' asserts itself in commencement with a torrential downpour of fire upon the sub-human flock fit for slaughter through their blind conformity to self-degrading and subservient behavior. Like the blinding flash of light before the explosion of a nuclear weapon, 'Reaper Abyss (Real Rain)' invokes immediate fear and panic as the foundation and chemical properties of a Revenge assault are executed with surgical precision through the recognizable J. Read drum pattern and commanding vocal declaration. The neutralizing pulse of bass, bizarre gargoyle-esque effects and blizzard-like riffs of Vermin also make their dreaded appearances on 'Reaper Abyss (Real Rain)', thus the show of utilitarian habits manufacture and maneuver with a distilled hatred.

With a spear driven deep into the very essence of sheep and shepherd, all hope is sacrificed in barbaric display as 'Reign Power (Above All Born)' makes an entry unto the battlefield. Putting to rest with a lethal injection of blast beats, shrieking guitars and a murderous array of vocals, 'Reign Power (Above All Born)' condemns violently and conquers mercilessly in defiance of the sheep-sheltering system. To follow the path of glorified evisceration, 'Reign Power (Above All Born)', 'Oath Violator', 'Salvation Smothered (Genocide of Flock)', 'Human Animal' and 'Self Segregation (System Torched)' arrive with in-humanitarian advances as J.Read and Vermin would deliver a callous scourging, a sonic nuisance reminiscent of early material.

Hence, it must be said that Strike.Smother.Dehumanize is (for me) Revenge's best offering put forth since Triumph.Genocide.Antichrist. By no means is this a statement to discredit albums such as Infiltration.Downfall.Death or Behold.Total.Rejection., rather I say this due to how fitting for a Conqueror record some songs on Strike.Smother.Dehumanize are. Conqueror is the pinnacle of J. Read's efforts (how I perceive it) and to have 'Reign Power (Above All Born)', 'Lightning Mythos' and 'Self Segregation (System Torched)' compete with material on War.Cult.Supremacy, speaks highly with regards to the state of Revenge.

The material on Strike.Smother.Dehumanize has a very fluent movement occurring among groove, technicality and aggression, thus positively affecting the album as a whole, hence the songs appear to have a watchful dispersal of mentioned attributes instead of appearing unbalanced and bloated. J. Read's vocals are still creature-esque and outstanding, while his drumming and overall songwriting aided by Vermin's bass, riffraff and effects remain as exceptional and exemplary contributions to war metal.

Strike.Smother.Dehumanize is Revenge's best in a long time, it hearkens back to the days of Conqueror and topples early Revenge entries. An unprecedented yet glorious happening for a band this decorated and ancient.