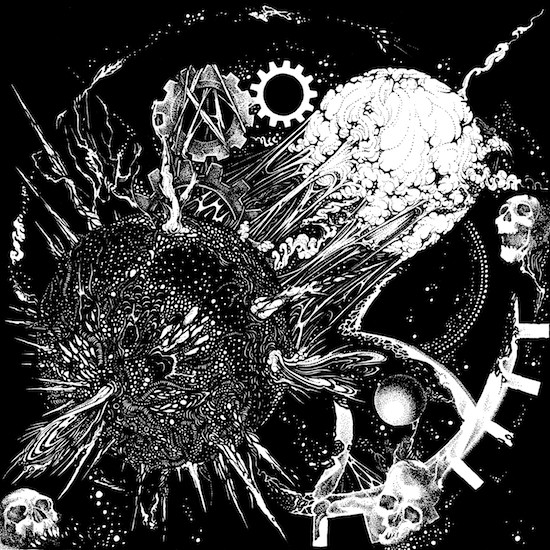 Detaching from humanity has been one of the primal trademarks when we talk about black metal, sonically and aesthetically. Whether displaying horrendous corpse painting, using infamous stage names and writing unintelligible songs with the lowest production values possible. The subgenre is full of stereotypes, seems like has no beginning or end, almost like an Ouroboros eating its own tail, going nowhere but disseminating everywhere at the same time.

From time to time, obscure cosmic alignments occur and bands like Membaris arrived to destroy all preconceptions, stereotypes and clichés. A rebirth is needed, a cleansing of impure blood to improve the descent has to be done and the last release of these German black metal veterans is the cure to the disease.

More than ten years in the underground and five albums on their shoulders is the proof that black metal is a constantly changing entity that hails and honors the roots of the past but keeps looking ahead for further improvement. That is the case of Misanthrosophie, Membaris' latest poetry of chaos. This dark invocation of cosmic turmoil consists of nine songs that mixes merciless, layered, complex and structured black metal hymns that have nothing to do with the stereotypes mentioned above (except for the corpse paint and stage names).

The albums starts with an overwhelming avalanche of blast beats and transcendental/melodic tremolo picking guitars that warns you of what’s to come, 'Architektur Fern Struktur' is the first cosmic invocation. Do not underestimate this band for any reason, these daemons know how to twist structures with dynamic changes of rhythm and vocals that range from the typical raspy/high shrieks to lamentations of profound existential sorrow; take 'Nebel Haras' as an example. 'My Path Of Stars' summons damnation upon all your beliefs and demonstrates the skill to create transcendental black metal tunes with high quality production but maintaining a certain dirty sound that characterizes the genre from others. 'The Only Reason To Stay' is the dichotomy of the record because this is an almost folky/pagan song that remembers the old days of Bathory (in their Viking/pagan era). The overall experience when listening to Misanthrosophie is full of mixed feelings of darkness and obscurity. It is like walking a path to a higher dominion where your humanity disappears, and you become one with the deities of destruction and chaos. There are some moments to reflect where acoustic guitars and clean vocals are dominant but in general your constant companion is darkness and hate in its purest form.

To sum up, if you want to engulf your existence with top notch underground black metal atmospheres, look no further into the abyss. Membaris has crafted a very chaotic yet transcendental gem; al the melancholy from the second wave of black metal bands mixed up with very skillful musicianship and talented songwriting. Walk the path to obscurity guided by the high priests and “true” sorceress of comic chaos called Membaris.