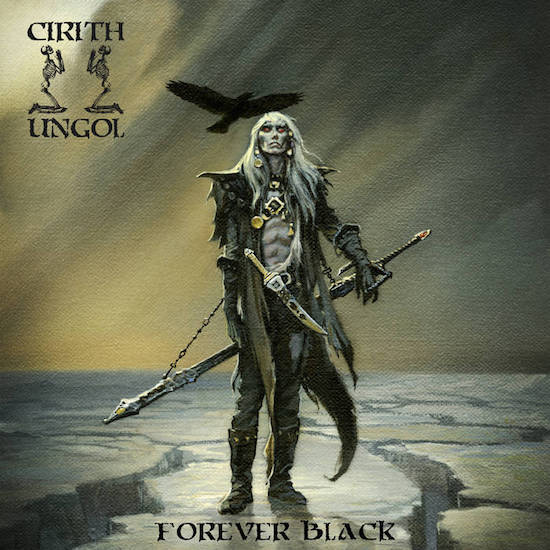 Cirith Ungol should really require no introduction to the metal masses at large; for the younger fans or just those that may have missed the boat on these guys, the band has a long and healthy career since 1972's formation. The California quintet plays a brand of doomy traditional metal that all-too-often gets overlooked in the grand pantheon of U.S. metal bands with both staying power and abundant talent. The band's fifth full-length, aptly titled Forever Black, emerges on April 24th, and not only has the band retained its solid footing, they've proven that older masters can truly be important in the modern era.

From the first notes of the intro track, 'The Call', I just felt something heavy and solid was coming my way, and by the second track, 'Legions Arise', I was lulled into a state of total conformity. The call to arms, without benefit of cheese or fist-pumping posturing, is a true rallying cry for today's metal fan desperate for something to whet the otherwise parched palate. I'm marveling here at the sheer power of this album, loaded with style and unmitigated power. The crunch of the guitars and bass is undeniably potent in driving this album forward. In a time where riffs are endlessly and shamelessly recycled to the point of criminality, Cirith Ungol simply crushes with both modern simplicity and old-school weight.

'The Fire Divine' is one of the heaviest post-Black Sabbath songs I've had the pleasure to hear; not so much Sabbath-like as it is Sabbath-esque in total ambiance and feel, saying nothing of the immediate cascade into the next potent track, 'Stormbringer', which has true archaic power metal vibes all over it. Vocalist Tim Baker is, without question, one of the most under-looked and underappreciated metal vocalists ever; the man simply doesn't get the credit he richly deserves. No Halford-like high wails of epic fortitude, no low-tone Dio bellowing for gods and magic tomes abound; Baker just sings his proverbial ass off without pretense or reservation. That said, the track 'Fractus Promissum' is just about as 70's-heavy as it could possibly get; that stellar guitar tone and almost other-worldly battery beneath is just brilliant. I can't get enough of how great this album is, front to back. How the hell this band didn't get absolutely huge is both ridiculous and insulting...and yet, here we are, some near 50-years later, being gifted with their provisions so generously.

I can sit here for an hour and bore you with textual orgasms over this band and album until you fall asleep or just decide, aptly, that I'm a windbag. I'll suffice it to say this before hoping you'll check them out for yourself: Cirith Ungol, in its purest form, is U.S. heavy metal at its absolute finest, a blueprint of ancient style and modern relevance that not only stood the test of time but spat in its face. Forever Black defends any faith, masters any reality, and numbers any beast right with the best of them; it's really that solid, and, as mentioned, it's a damn shame these guys aren't up there in celebration with bigger name bands of yesterday and today.

For a guy like me so steeped in death, thrash and black metal these days, every now and then I get a jolt to the system to remind me where I came from and who set the wheels in motion all of these years. If the media and the historians cared to leave Cirth Ungol as a veritable footnote among the sentinels, let me, for just a few moments, forgive them all their trespasses and hail the band in every way.