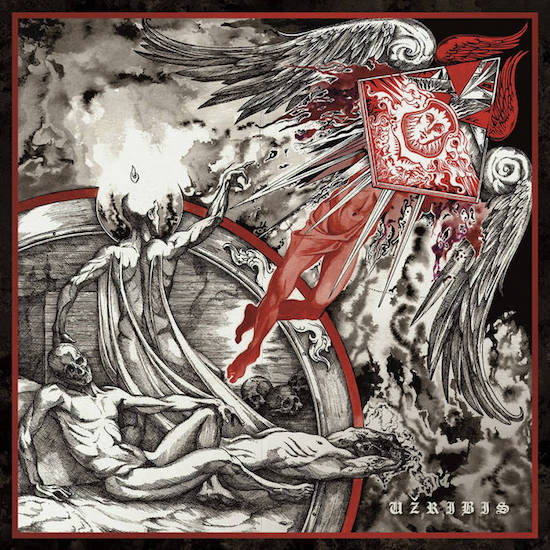 Lithuania is a beautiful country. I have never been there (but this is not the main reason for its beauty), but all I have seen about this landscape so far was fascinating. The same applies for the music from Lithuania. Okay, the only band I really know is Luctus, but these dudes definitely hit the bull’s eye with their second and third album. After seemingly endless five years, they enter the surface again with Užribis. This album does not beat around the bush – quickly it becomes evident that the group has not modified its style. Luctus still attack with a mix of thrash and black metal, some early Slayer solos and a small number of horror and punk vibes. The title track is a very good representative of the album, because it shows all these features and moreover, it holds some flattening guitar lines. Luctus have a talent for rabid yet haunting melody lines (and please do me a favour and understand “melody lines” in the broadest sense).

The band does not focus on retro sounds. I do not listen to the next chapter of early Bathory or old Venom worship. The musicians also show no innovative approach, but they score with demanding song patterns. This is rather the exception than the norm when it comes to black thrash metal. Better still, these patterns find the right balance between complexity and accessibility. The guttural lead vocals add a great amount of dirty negativity and so it is bearable that the band has marginally lowered the average velocity, if I am not mistaken. Anyway, this detail does not affect the harshness of material. The guitars send greetings from hell, the bass supports them with a grim smile and the drums, in particular the double bass, love to thrash the listener into the darkest holes. The promo sheet speaks of a spiritual journey through the obscure depths of the soul. This is not totally wrong, but from my point of view, here we have the case that brutality beats spirituality. Luctus mostly search for the maximum of violent force, while reflecting thoughts and aesthetic sensitivity eke out a living. Admittedly, I do not understand a single word of the lyrics, but the music alone does not indicate a focus on spiritual modes of expression. Do not expect trance-like sequences. Luctus prefer to offer a deadly cocktail while avoiding major flaws.

Just like its predecessors, the album is well produced. The heavyweight, rasping guitars show their muscles, the voice is neither too loud nor too silent and all in all, the production does not lack pressure. So, in view of the technical implementation, there is nothing to grumble. Almost the same goes for the compositions. Naturally, those who like to find the fly in the ointment can rant about a lack of compactness. Okay, maybe two or three songs are a bit too long, but there is no significant mismatch between substance and length of the individual pieces. Maybe evil-minded detractors will also say that there is no “übersong” on this album, but these guys should take a good look at themselves. How many of them have ever done an outstanding job? It does not matter. More important is that I finally should book a flight to Lithuania. Unfortunately, that’s not that easy in times of the Corona virus.