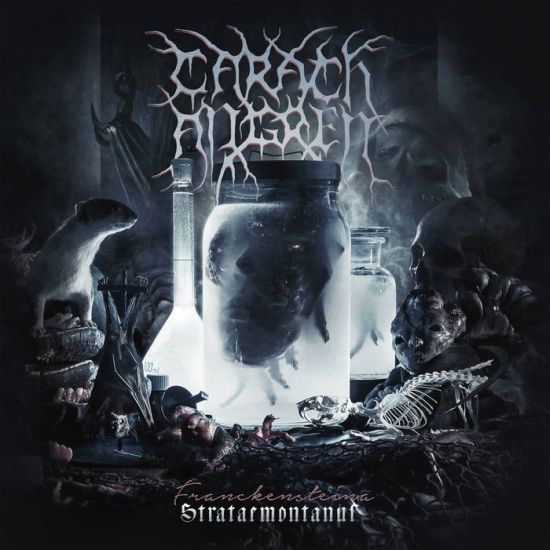 Carach Angren have been pumping out their brand of horror-inspired symphonic black metal for a decade and a half now. Despite each album having at its core the same concept and without too much deviation from their norm, the band have managed to keep their sound impressively fresh over the years, varying from the haunting melodies of Lammendam to the utter bleakness of Where the Corpses Sink Forever. And with the release of Franckensteina Strataemontanus, I'm pleased to report that the trio have kept up this trend.

If there's one thing this record proves, it's that Carach Angren's material has to be listened to from start to finish. There's simply no other way about it. Singles such as 'Monster' were on initial release incredibly underwhelming, sapping a lot of my excitement for the album and making me believe we were getting another misstep akin to 2015's This Is No Fairytale. With frankly terrible lyrics, a very muted guitar sound and a bizarre structure that never really goes anywhere, 'Monster' was one of the strangest choices for a single I've heard in recent times. But when heard in the context of the album, nestled between two longer, more typical Carach Angren pieces, it falls into place. The muted guitars become a good match for the overall atmosphere of the album, with the band's trademark haunting synths present to carry most of the melody on their back and the rhythmic guitarwork simply providing a backbone for them to work off.

Carach Angren certainly do make the most of keyboards and orchestration all over Franckensteina Strataemontanus, with the highlight being the wonderful, ethereal yet mournful violin climax reached in 'Sewn for Solitude'. The instrument returns in striking fashion for eight moody minutes to end off the album in 'Like a Conscious Parasite I Roam' seeing it combine with wistful piano and grandiose synths. Every element that's made Franckensteina Strataemontanus what it is comes together to one final, cinematic crescendo before each layer is gradually stripped away. In terms of composition this ending is the highlight of the album, and it makes me wish the violin was used in more places. It's a magnificent instrument and in the closing segments of the record Carach Angren use it to its full potential.

One of my favourite decisions the band have made recently is to increase the presence of melodic clean vocals in their music. The story-like structure of their songs provides a perfect vessel for them to come in when it's most effective, and the singing itself carries with it a genuine poignancy and sense of reflection, especially with the symphonic overtones that often accompany them. The harsh vocals are the same as ever, somewhere between a lower rasping and a classic black metal scream. They once again fit the aesthetic like a glove, leaving us with another very capable performance from Seregor.

All good things, however, must come to an end, and sadly this release will be the last to feature all three members of a prominent extreme metal trifecta. Drummer Namtar's departure was a sad piece of news, but at least he went out on a high note, his interesting rhythm work adding an extra layer of drama to the story being told.

Overall, Franckensteina Strataemontanus sees Carach Angren doing what they do best - weaving tales of mortality, mystery, ghosts and ghouls, all wrapped up in a neat, symphonic black metal package. It's 50 minutes of the band firing on all cylinders and it comes together in a great fashion. My sole complaint is that the album does lose some momentum in the second half, and the trio of singles in 'Operation Compass', 'Monster' and 'Der Vampir Von Nürnburg' are somewhat below the standard presented elsewhere, but even that is relatively minor in the scheme of a 50 minute album. Carach Angren have returned strong, and hopefully even without Namtar they can carry the momentum forth to new places.