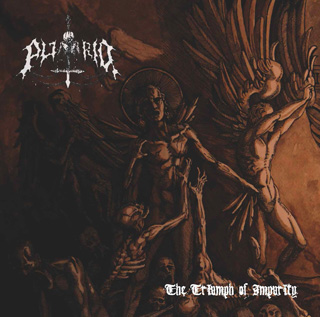 With a band name like Putrid one can easily imagine that what's going to be offered will not be for the faint at heart, and you would be right. This is some filthy and menacing blackened death/thrash, the kind that they do so well in South America. It's evil, relentless and unmerciful and reeks of underground spirit.

And true to this tradition, Putrid comes out blazing. Obviously, the most prevalent influence is Sarcofago (of course), but you can easily add the other usual suspects to that list: Sextrash, Possessed, Holocausto, Sodom, they're all here in the vicious attack of blasting drums, roaring barked vocals and tremolo picked riffs. It's high speed menacing black/thrash with a touch of primitive death metal, delivered with raging intent. In songs like 'Gehenna' and 'Pentamorphic Maze Asylum' Putrid let some Scandinavian touches seep into the music, giving them a frosty touch in their execution. The band is at its best when going bat-shit bonkers in unrelenting vicious insanity but in the aforementioned 'Pentamorphic ...' they slow down things significantly which provides a change of pace, giving the listener some space to breathe. Due to the somewhat thin sounding production the songs lose some of their menacing power though, otherwise this album could have been up there with kindred spirits as Impiety, Goat Semen and the first Angelcorpse album. Their next full length Antichrist Above had this problem solved, finally exhibiting their primal metal of death to full potential.

This is aggressive metal that goes right for the jugular even if it's marred somewhat by the thin production. Still, the venomous approach to their craft shines through and should be satisfying to all those into raw and vicious South American black/thrash/death.