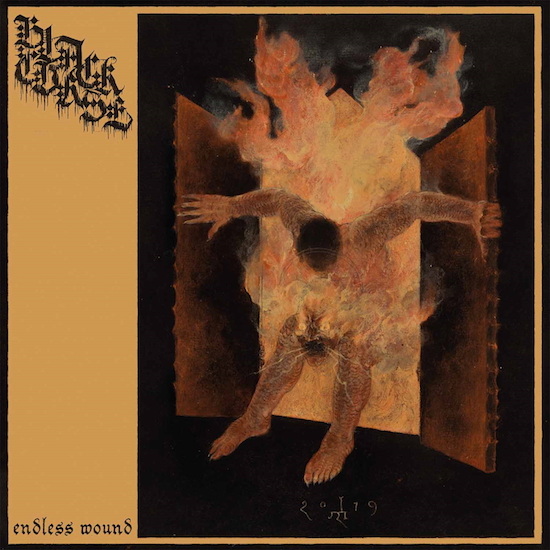 From an empty space, an endless tunnel runs deep through the core-less domain of absence. In it, a lifeform ever adapting to environmental changes seeks to emerge through a passageway offered by an open gateway. Emerging from a heap of shed skin and membranous decay comes Black Curse with Endless Wound. Comprised of members home to Spectral Voice, Blood Incantation, Primitive Man and Khemmis (a super-duper group if you may) apply their collective set of skills and knowledge to engineer a cavernous, bestial hybrid of black, death and doom metal, but for my pleasure, war metal with a twist; lots of twists in fact. Just when you'd think there's enough consistently happening to link the material to any specific sub-genre, Black Curse changes the route in refreshing mannerisms drawing you back to square one.

Though all the while consistent, Endless Wound fidgets about with strange sounds and vocal antics, giving the music a nomadic feel yet all the while clearly knowledgeable whilst set-out to achieve its intentions. In addition to its sense of wander, the music here seems to devolve or spiral out of control as tracks progress; thus the image of the material deforms as they stray further and further away from predictability. Endless Wound is without doubt one of the more unique releases of 2020 in underground metal and black/death metal for that fact. After all, what would be the point of unifying musicians of such diverse styles if you intend only to follow the pack.

This showed up unexpectedly, if anything, I was looking forward to hearing a new Spectral Voice or Khemmis teaser track or something of the sort. However, I won't complain because Black Curse's Endless Wound would be the hold-over I needed until I could get some fresh tunes from said bands. Not to be mistaken for a plane effort or undermine the importance of the music on the album, as what's offered is a real pleasure to the ears. As said before, there's alot going on, so one listen could not justify the effort or satisfy anyone as far as covering the many aspects of Endless Wound.

By the time 'Charnel Rift' makes an entrance, you immediately forget and even begin to question whether the members involved in Black Curse are indeed those of Khemmis, Blood Incantation, Spectral Voice and Primitive Man due to the manner in which and how convincing the album opens as black/death metal, none of whom to my knowledge had played in a band the sort until now. Hence, if refreshing be applied to any material, Endless Wound would be a deserving candidate. To recall any bands that may be playing within a similar vein as Black Curse is a bit challenging also, even though the fruits of their works echo Complot, Nuclear Hammer and to a very minimal degree, Impetuous Ritual, yet present is no precise motion/movement that could be securely attached to any of the mentioned bands, as there are microscopic and less identifiable elements factored-in and accounted for on Endless Wound.

Khemmis delivers on the doom metal aspect, Primitive Man applies the bruising touch of chaotic riffing and song structures where they deem fit, while Spectral Voice and Blood Incantation members broaden the room for some level of depth and technicality to manifest and take effect. There's a sense of weight in each department, whether it be the vocals, riffs, drumming and bass, altogether surmounting a miserable, dense, diverse and destitute atmosphere, whilst ironically tidy in its presentation and delivery. Bringing me to the album's cohesive outlook; you'll hear tracks such as 'Charnel Rift' and 'Crowned in (Floral) Vice' quickly establish a recognizable foundation with which is conducive for an album this sort, then with progression, 'Enraptured by Decay', 'Seared Eyes' and 'Endless Wound' terminate and replace some of the traits home to the sub-genre with an adventurous array of instrumental and vocal unorthodoxy.

As if deliberately putting the music through a process of erosion with complexities seemingly deteriorating to appear more barbaric though simultaneously held-together by a rhythmic coordination aiding the exigent atmosphere. Understandably chaotic is perhaps one way to describe the music on Endless Wound after hearing a track like 'Seared Eyes' utilize all kinds of strange gasps and if I'm not mistaken the growling of a cat?, however, is not submerged or strictly tied to an anti-music ideology, instead two opposing sides share the space on Endless Wound. In amusement and awe I tell you, this record is intriguing in more ways than one, thus it would be incriminating to not give Endless Wound consecutive listens as to not miss the gems lying beneath the surface level of the war-metal like hammering, destructive riffs and vocal antipathy. A must own for all black/death/war-metal listeners.

After a pretty solid 3-track demo last year, Colorado's Black Curse issues its debut with a certain flair for the black-death dramatic. Entitled Endless Wound, the band's first offering is one of interesting carnality and some relatively dark charm, if such verbiage dare be laid upon such an offering.

The quintessential black-death sound that's universally established and accepted is most certainly thriving outside a vacuum in this CD, with songs that push the boundaries of ethereal landscapes and sonic fury cloaked in veritable black. There is simply nothing to dislike about this recording for its own sake; it's really a trip into another world, and I found it, personally, fascinatingly real.

What I did find most interesting (as I'm wont to do with death of this caliber) is the easy shifting of tone and direction in the songs, going from brooding, slow-ascending bleakness to quick, speedy assault and never seeming to miss a nook in the delivery. There truly is a meshing of emotions throughout, perfectly illustrated in the track 'Enraptured by Decay', a horrific jaunt along the crevices of a horror-filled nightmare. This song here is precisely what blackened death metal should encompass: fear, peaks and valleys, dread and respite, only to end up in the lap of whatever hell manifested in the entirety of the chasm with no real resolution to be had. When music tells a story in both lyrical and musical design, you have something special in your ears.

I've personally not heard death of this caliber since Dissection's "The Somberlain", and while I make no real stylistic comparisons there, the overall feel of building a true picture through an album is rife throughout. The tremendously volatile 'Seared Eyes', complete with vocal wails and grief-stricken tone, is a nice nestle between the aforementioned 'Enraptured by Decay' and 'Lifeless Sanctum'. This is yet another track able to illustrate agonies and hells unimaginable to the laymen or casual observer. An instrumental with hushed and almost imagined voices lingered beneath, the scope of the sounds is one of Jerry Goldsmith-esque orchestration had the man saw a metal album in his impressive and legendary arsenal. I'm sure when Mr. Goldsmith fashioned The Omen score way back in 1976, he never imagined horror-like scores being created in such a manner as they did some ten years later when metal music found its niche served far beyond the base. And, keep in mind, these three tracks are the tip of dismal iceberg – not a weak track to be heard.

Black Curse has seven tracks here that, in my humble opining, are quite an addition to any black-death fan's personal arsenal. The band manages to erect vibrant and horrific sentinels of terror, all the while retaining and disseminating style and form to a very credible plateau. Grab this up, support them, and tread ye carefully, lest you find yourself abandoning hope before entry....