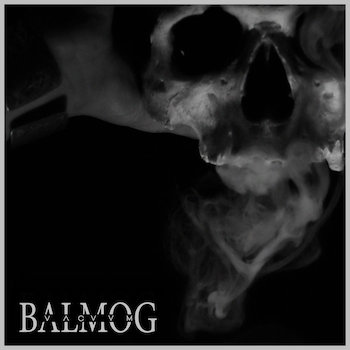 Balmog recently released their opus magnum. The monumental Pillars of Salt is a good, Watain-influenced song with some great parts. By contrast, Vacvvm sounds pretty autonomous. It is heavier than the one-track-release and it spreads the smell of sulphur. The album reveals a profound wickedness, the blood of innocent victims drops from every devilish guitar tone and the album’s atmosphere is characterised by the spirituality that made the subgenre great.

Balmog mixes thunderous riffing, pure vehemence and macabre melody-fragments. While doing so, they create hellish treasures like 'Hodegetria'. As is so often the case, density and intensity go hand in hand and the brutal, tormented and disturbing voice of the lead singer adds the final touch. The vocals deliver a strong element on this output, even the preaching sequences at the beginning and in the midst of 'Vigil of the Blinds' increase the uncomfortable feeling the music creates. But the instrumental sections are convincing as well, because the Spanish three-piece sees no reason to hide its talent for the creation of melodies that fit the spirit of black metal exactly. Just listen to the somehow sun-drenched yet threatening, nearly oriental first tones of the guitar.

Vacvvm is not a progressive work, but it also does not boast with all its advantages immediately. The album needs some spins to reveal its full might and I can only hope that this fact does not result in a wrong perception of the material. Of course, the senseless intermezzo in the centre of the album does not make sense. Worse still, it hurts its flow and intensity. Balmog gets back on track with 'Come to the Pulpit' – pay attention to the warm instrumental part that sets in after 3:40 minutes – and especially 'Gignesthai' marks another highlight. This track starts with an almost ritual part that leads to a hymnal section with nearly celestial choirs. But don’t get me wrong, the song also houses straight, fast hammering and many thrilling breaks. This song catches all moods the music of Balmog stands for; the desire to kill, total despair and the unfulfilled longing for salvation. In short, this is one of the tracks that show the entire grandness of black metal.

Vacvvm is equipped with an appropriate production and a stylish booklet. The non-musical elements set the proper frame for an album which is like a seductive Spanish lady who invites you to take a coffee (or more) in her kitchen. Maybe meat is on the menu as well! Of course, you can live on without accepting the invitation (foolish idiot!), but perhaps you will be missing something very good. Doubts are useless, their third full-length reveals the great potential of Balmog once again. It’s up to you to – do you really want to reject the invitation?